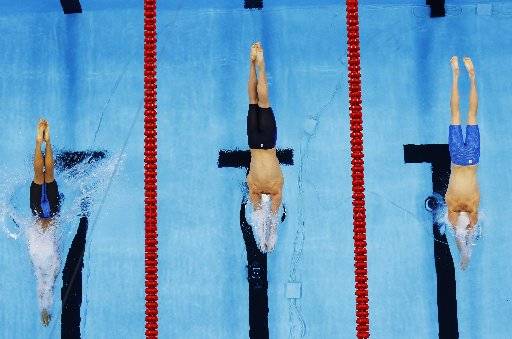 Texas Longhorn Townley Haas advanced to the 200 meter freestyle final after placing sixth in the 200 semifinals Sunday night in Rio.

Women’s 400 freestyle: Texas sophomore Joanna Evans placed second in her heat, but missed out on qualifying for the semifinals of the 400 meter freestyle. Team USA’s Katie Ledecky took first, over four seconds ahead of Great Britain’s Jazz Carlin. Evans, representing the Bahamas, was 13th overall at 4:07.60.

Men’s volleyball: Texas associate head coach Erik Sullivan and the USA Men’s Indoor Volleyball team fell to Canada 3-0 (25-23, 25-17, 25-23) in its opening game Sunday. Team USA made 28 errors in the straight-set loss and will seek its first win of the Games Tuesday at 1 p.m. against Italy. The match will be on NBC.

Earlier: Texas’ Townley Haas qualified for the 200 meter freestyle semifinals by placing second in his heat at 1 minute 46.13 seconds Saturday in Rio. He tied for the fifth best time in the preliminary round and had the second best time by an American swimmer. Team USA’s Conor Dwyer was just ahead of Haas at 1:45.95. China’s Sun Yang took the top time in the prelims at 1:45.75.