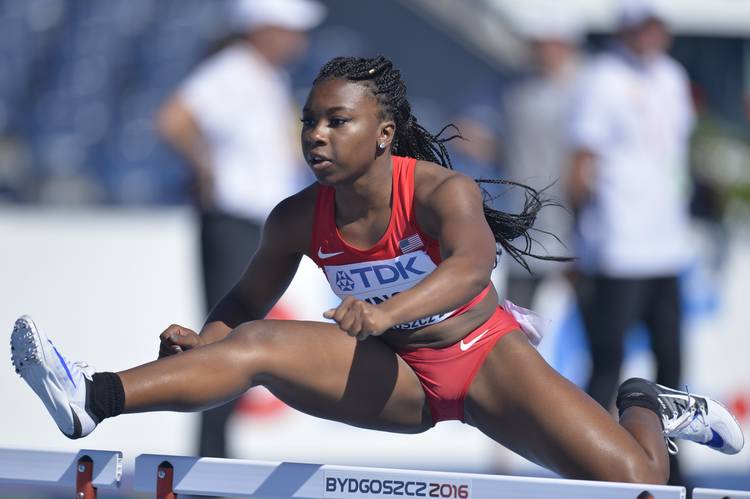 BYDGOSZCZ, POLAND - JULY 22: Alexis Duncan from USA competes in women's 100 metres hurdles during the IAAF World U20 Championships at the Zawisza Stadium on July 22, 2016 in Bydgoszcz, Poland. (Photo by Adam Nurkiewicz/Getty Images for IAAF)

Alexis Duncan, a future Longhorn, had a personal best performance at the IAAF World Junior Championships as she took fourth place in the 100-meter hurdles in Bydgoszcz, Poland on Sunday.

Duncan finished the race in 12.93 seconds for Team USA, just missing out on a bronze medal by .04 seconds. She ran a 13.02 in the semifinals.

Texas had six current or future Longhorns competing at the event. Duncan’s fourth-place finish was the best among the competitors.

Three other Longhorns competed for Team USA. Elena Bruckner took seventh in both the shot put and discus. Alex Rogers finished in 17th place in the 3,000 meter steeplechase. Destiny Collins was an alternate for the 3,000 meters.

Obrien Wasome fouled during his long jump qualifying round as he competed for Jamaica.

Big 12 Expansion: UConn, USF lead; Houston at bottom in athletics ‘worth’ per report