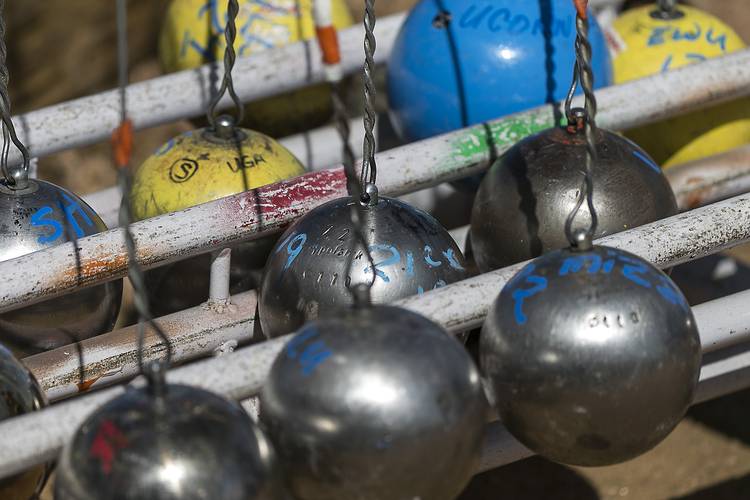 Hammers used in the men's hammer throw hang from a rack during the of the Nike Clyde Littlefield Texas Relays held at the University of Texas' Mike Myers Stadium in Austin, Texas, on Thursday, March 26, 2015. (RODOLFO GONZALEZ / AMERICAN-STATESMAN)

Haley Crouser opened her outdoor season strong with a win in the javelin event at the UTSA Invitational in San Antonio on Friday.

Crouser’s throw of 168 feet, 8 inches topped the field by more than 50 feet in her debut for the Longhorns. She set the meet record by 15 feet.

“Haley had a great day her first time out throwing for Texas and breaking the meet record at UTSA,” assistant coach Ty Sevin said. “I think it’s a good start, especially from a short run, and I’m looking forward to her next opportunity at Texas Relays.”

Lauryn Caldwell set a record twice in the meet, topping her old hammer throw records with two throws. At the end of the competition, her new mark of 181-10 was good enough for fifth place.

“Lauryn led off from the get go. What I liked about her was the consistency of her grouping of throws,” said Sevin. “I knew the school record was going to be broken multiple times this year, but seeing her with such a consistent group of throws and knowing we’ve really only been throwing the hammer for a month was really encouraging.”

Alan Zapalac also had a good performance in the men’s hammer throw. He earned six points for the team as his throw of 190-4 was good enough for third place.

Purdue leads the men’s overall standings with 49 points with Texas in seventh place with seven points. On the women’s side, UTSA is in the lead with 40 points. Texas is in fourth with 12 points.