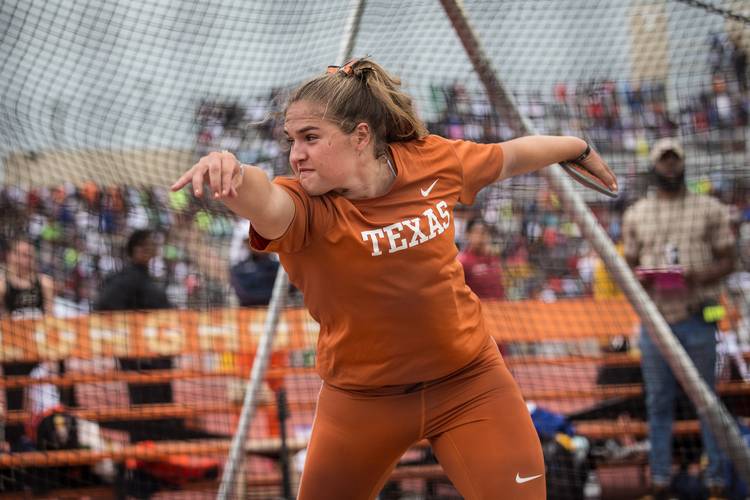 Texas freshman Elena Bruckner warms up before competing in the discus throw at the 90th Clyde Littlefield Texas Relays at Mike A. Myers Stadium on Saturday April 1, 2017. (TAMIR KALIFA/ AMERICAN-STATESMAN)

The Texas men won the Texas Invitational as the women came up just ten points shy of matching the feat, finishing in second place to Kansas State.

The men scored 131 points to finish ahead of Auburn by 42 points. The Longhorns had 12 finishes in the top-5 of Saturday’s competition.

“There were so many great performances,” said UT head coach Mario Sategna. “I think coming off Texas Relays we had a much needed week off. You’re wanting to see some people step up and we definitely saw that today.”

Spencer McCloud finished the men’s high jump with a mark of 6-9 1/2 to tie for fifth.

Barrett Poth took second place in the pole vault with a mark of 17-9, third best in the Big 12 this season.

Darrell Manhertz finished the 800 meters in 1:50.44 which was good enough for third place.

Kirema Macharia also took a second-place finish in the 400 hurdles.

On the women’s side, Olivia Thompson and Zola Golden highlighted the competition with first-place finishes.

Bruckner’s mark of 178-11 in the discus held up for second place. She also took second in the shot put with a mark of 54-1 1/4. She lost to former Longhorn Michelle Carter who took the gold at the Rio de Janeiro Summer Olympics. Carter, represented by Nike, finished with a mark of 60-10.

Burton took second place in the 100 hurdles with a time of 12.65. It’s the top time in the NCAA this season, though slightly wind aided. She was defeated by Adidas-sponsored and current world record holder Kendra Harrison.