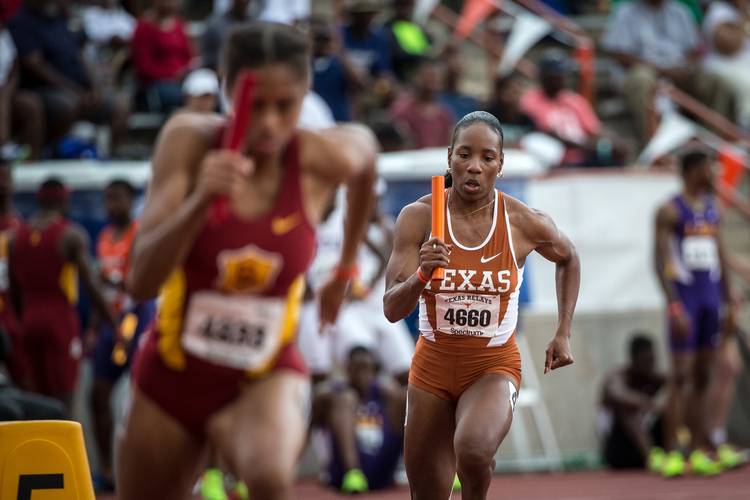 Chrisann Gordon ran the fastest 400 meters in the NCAA this season as the Texas track and field team had a strong performance at the LSU Alumni Gold in Baton Rouge, La. Saturday.

Gordon finished her race in 50.64 seconds, nearly a half second better than her previous personal best, to take the win. It was the fourth-best time in UT history.

“I was pleased to see Chrisann Gordon run that well. That’s a great time for her this early in the year,” said head coach Mario Sategna. “I know Zola is pleased but she’s not satisfied. She wants to run faster.”

Zola Golden finished third in the race with a personal best time of 52.19.

The Texas men had strong sprinting performances as well, taking three victories on the day.

Robinson finished the 400 hurdles in 49.55 to take second place.

Teahna Daniels took third in the women’s 100 meters with a season-best time of 11.18.

Ariel Jones and Mariam Abdul-Rashid took second and third in the women’s 400 hurdles.

The men’s 400 relay team took second place with a time of 39.24. Charles Anumnu, Givans, Ntreh and Bailey teamed up for the race.

Both women’s relay teams took third. Gordon, Golden, Ashley Miller and Daniels finished the 400 relay in 44.81. Jones, Golden, Miller and Abdul-Rashid teamed up to finish the 1600 relay in 3:37.29.

Spencer McCloud had the best day for the Texas jumpers as he took third in the high jump. He cleared a height of 6 feet, 9 inches in the effort.