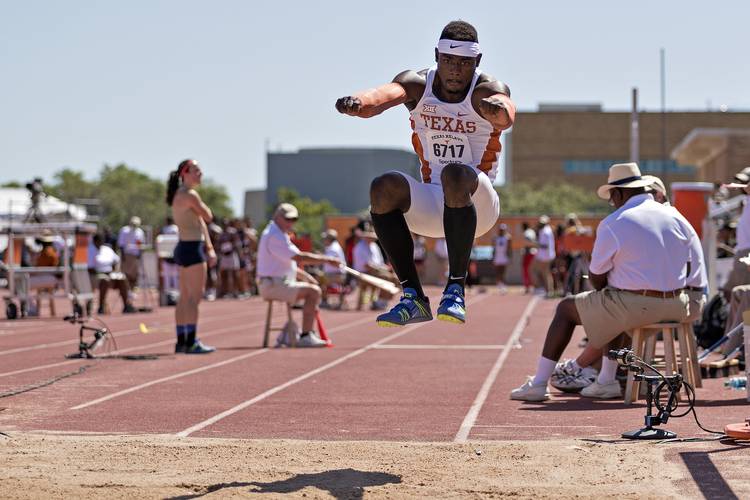 Texas athlete O'Brien Wasome competes in the triple jump event at the Texas Relays at Mike A. Myers Stadium on March 31, 2017. Daulton Venglar/AMERICAN-STATESMAN

Steele Wasik set a facility record on his way to winning the Big 12 title in the decathlon at the Big 12 Championship in Lawrence, Kan. Saturday.

Wasik scored 7,715 points to set the record for Rock Chalk Park and notched the ninth-best performance in school history. He took first place in the 110-meter hurdles, the discus and the javelin on the second day of competition. His outdoor title goes with the one he won for the indoor championships and is the sixth for Texas.

“I’m excited overall for the team because we need the points to win the championship,” Wasik said in a release from UT. “And that’s what it’s all about. It’s important for me, to come out after no-heighting at the Texas Relays to get a national mark and to win as the defending indoor champion.”

Wasik’s total score was the 11th best in the nation this year and secures him a spot at the NCAA Championship in June.

“It was great to see Steele get through with a qualifying score for nationals, winning the conference and even coming back and making the hurdle final,” said head coach Mario Sategna.

Overall the men’s team leads the Big 12 Championships with 50.50 points, just ahead of Texas Tech’s 49 points. The Texas women are in seventh with 20.50 points, trailing first-place Kansas which has 67 points.

Virginia Preiss completed the heptathlon with 4,588 points a personal best that was good for 11th place.

Running events began Saturday and the Longhorns advanced 31 runners to the finals overall. There will be plenty of opportunity for Texas to score points in Sunday’s finals.

Alex Rogers qualified No. 1 for the men’s 1,500 meters. Sandie Raines and Destiny Collins also qualified for the 1,500 on the women’s side.

Rushelle Burton, Ariel Jones, Mariam Abdul-Rashid and Ashley Miller qualified for the 100-meter hurdles final. Burton qualified at the top of the field with Jones close behind.

Chrisann Gordon had the best time in advancing to the 400 finals. Zola Golden qualified second while Serenity Douglas advanced with the eighth-best time. Carlton Anumnu and Aldrich Bailey Jr. also qualified in the event for the men.

Teahna Daniels qualified second in the 100 meter event. For the men, Senoj-Jay Givans, Charles Anumnu and Chris Ntreh will compete in the men’s final.

Jones and Abdul-Rashid both advanced to the final of the 400-meter hurdles. On the men’s side, Kirema Macharia and Byron Robinson also qualified for the final.

Golden and Daniels will run in the 200 finals on Sunday as well. The men will send four runners to the 200 final as Bailey Jr., Charles Anumnu, Givans and Ntreh all qualified.

Nate Moore and John Rice scored some points for the men in the 3,000-meter steeplechase. Moore took sixth place with Rice finishing seventh.

In field events, Kally Long took fifth place in the pole vault with Lauryn Caldwell finishing in fourth in the shot put.

O’Brien Wasome finished in second place in the men’s long jump while George Patrick took third. Spencer McCloud finished in a tie for fourth in the men’s high jump. David Rueff scored two points with a seventh place finish in the shot put.