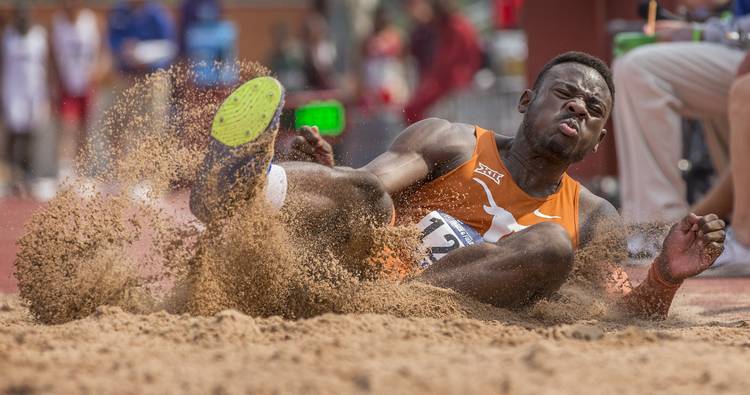 O’Brien Wasome of UT competes in the triple jump at the NCAA West Regional at Myers Stadium. JAY JANNER / AMERICAN-STATESMAN

The Texas men’s 400-meter relay team broke the school record to qualify for the final on the first day of the NCAA Championships at Hayward Field in Eugene, Ore. on Wednesday.

Carlton Anumnu, Aldrich Bailey Jr., Charles Anumnu and Senoj-Jay Givans finished the race in 38.68 seconds to beat the previous school record of 39.08 and qualify third in the event.

“Those four men have wanted that record for a few years now,” said UT assistant coach Zach Glavash in a UT press release. “They had been so close on many occasions and finally lined it up and broke it [by] almost half a second.”

Givans had a nice day at the Championships, qualifying for two other event finals. He finished the 100 meters in 10.02 to qualify sixth in addition to qualifying for the 200-meter final in 20.32. Givans’ performance in the 200 was a personal record and good for fourth best in school history.

The men’s decathlon began Wednesday as the athletes completed five of the ten events. Steele Wasik sits in 12th place while Wolf Mahler is in 14th. Wasik took third place in the shot put and posted two personal records to help him score 4,006 points. Mahler scored 3,955 points and earned a personal best in the shot put.

“I was proud of the decathletes and the way they fought,” said head coach Mario Sategna. “Other than the high jump Steele had a great day. Wolf has been off since April with an injury and he’s a gamer.”

In the 400-meter hurdles Byron Robinson finished in 49.78 to take 10th place overall. He’ll miss out on the final after clipping a hurdle in his heat.

John Burt and Spencer Dunkerley-Offor competed in the 110-meter hurdles but neither qualified for the final. Dunkerley-Offor finished the race in 13.61 while Burt clocked in at 13.85.

The Texas men competed in two field event finals but couldn’t come away with better than a 10th-place finish. O’Brien Wasome took 10th in the long jump with a mark of 24 feet, 10 1/2 inches. Barrett Poth took 11th in the pole vault with a height of 17-4 1/2.

The Longhorns continue action at the NCAA Championships Thursday as the women compete in running semifinals.

The Next 25: No. 23 Deion Hankins wants to put El Paso on the recruiting map