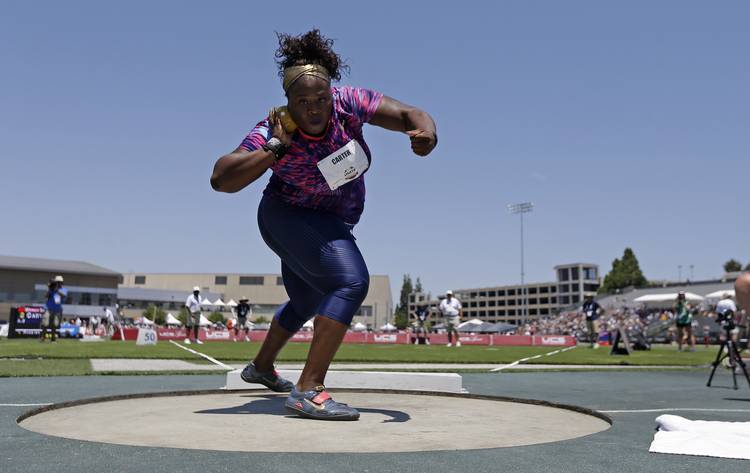 The Texas Longhorns track program was represented well on the third day of the USATF Championships in Sacramento, Calif. Saturday. A former Longhorn earned a bronze medal while others advanced to sprint finals.

Michelle Carter, 2016 Olympic gold medalist in the shot put, took home a bronze in the event with a throw of 63 feet, 5 1/2 inches. The mark was good enough for Carter to qualify for a spot on Team USA at the IAAF World Championships.

Current Longhorns, Byron Robinson and Aldrich Bailey Jr., also highlighted the day for Texas. Robinson finished the 400-meter hurdles in 48.71 seconds to qualify third in the semis, automatically advancing to Sunday’s final. Bailey Jr. advanced to the semifinals of the 200 meters with a  time of 20.76. That was 14th best on the day.

In the women’s first round of the 200, two former Longhorns qualified for the semis. Kendall Baisden qualified 11th with a time of 23.03 while Alexandria Anderson finished in 23.14 to qualify 16th.

Ashley Spencer, another Texas ex, automatically qualified for the 400 hurdles final with a time of 54.88. She had the sixth best time of the day.

Gordon qualified with the best time of the women’s 400 meters as she clocked a personal best 50.30 to advance to the final.

Wasome finished eighth in the men’s long jump with a distance of 25 feet.

In the USATF Junior Championships, Micaiah Harris, a future Longhorn competed in two events. He qualified for the 200-meter final with a time of 21.30. That was the third best time of the semis. Harris took seventh place in the 400 with a time of 48.77. He didn’t run in the 200 final after that.