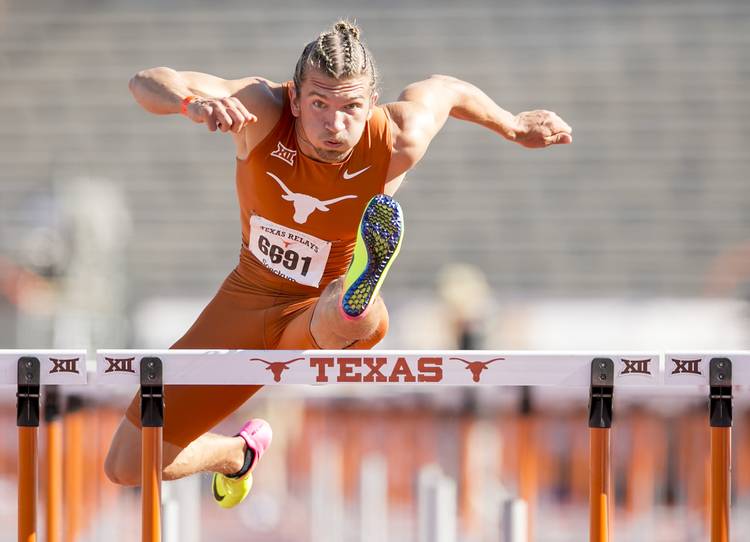 Wolf Mahler of UT competes in the 110 meter hurdles portion of the decathlon at the 90th Clyde Littlefield Texas Relays at Mike A. Myers Stadium on Thursday March 30, 2017. JAY JANNER / AMERICAN-STATESMAN

Wolf Mahler highlighted the performances by the current and former Longhorns competing at the USATF Indoor Championships in Albuquerque, N.M. on Saturday.

Mahler, competing as an unattached athlete in the men’s heptathlon, won a silver medal after recording a personal best 5,923 points. That was just 12 points behind Jeremy Taiwo of the New York Athletic Club.

Mahler won the 1,000 meters and the pole vault. He took second in the 60 meters, the 60-meter hurdles and the long jump. Mahler also took fourth in the shot put and high jump. He set personal records in five of the seven events.

“Wolf had a tremendous meet,” said interim head coach Tonja Buford-Bailey. “The thing that excites me about Wolf is he is such a team leader. With him only having outdoor eligibility for us this year, I hope his teammates are home watching this performance and get inspired by how hard he worked at this meet and by what he was able to accomplish at such a tough meet. I can’t wait to see what he can do for us outdoors.”

Former Longhorn Aldrich Bailey Jr. finished the first round of the 400 meters with the fifth-best time at 45.93. His qualifying time was a personal best. He’ll compete in the final on Sunday.

On the women’s side of the 400 meters, Courntey Okolo and Ashley Spencer represented UT as former Longhorns. Okolo qualified for Sunday’s final with a time of 51.75. That was the second best qualifying time. Spencer finished 11th with a time of 53.21 and will miss out on the final.

Another former Longhorn Marielle Hall finished fifth in the women’s 3,000 meters with a time of 9 minutes, 15.19 seconds.

Current Longhorn Elena Bruckner took 10th in the shot put with a mark of 52 feet.

Another Texas ex, Leo Manzano finished the men’s first round of the 800 meters in 19th. That wasn’t good enough to advance to the final.