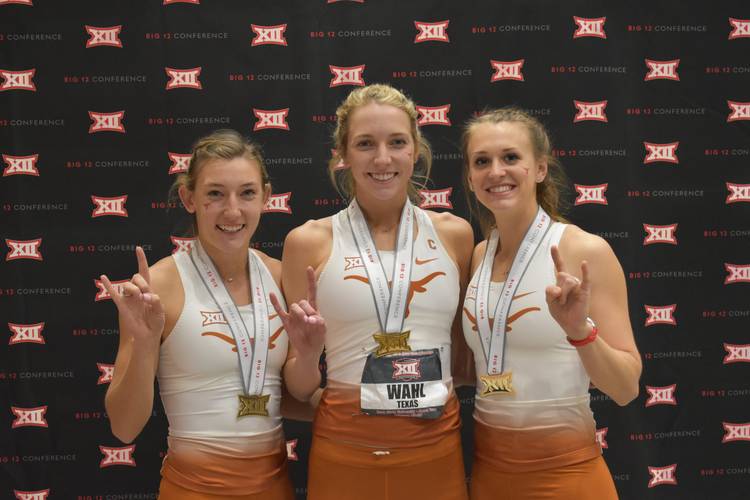 Virginia Preiss (left), Georgia Wahl (middle) and Ashtin Zamzow competed in the pentathlon for the Texas Longhorns in Ames, Iowa on Feb. 23, 2018. (Photo by UT Athletics)

The Texas Longhorns came away with three Big 12 titles and a little bit of history after the first day of the Big 12 Indoor Track and Field Championships in Ames, Iowa on Friday.

The women lead with 44 points, seven points ahead of Iowa State while the third-place men have 38 points and trail Iowa State by five.

Ashtin Zamzow won the indoor pentathlon by a single point, edging Kaylee Hinton of Texas Tech, 4,076-4,075. Zamzow became the first woman to win the Big 12 title in the pentathlon for Texas.

Zamzow finished the 800 meters, the final event, in 2 minutes, 18.02 seconds for third place. She needed to avoid finishing behind Hinton by more than half a second and did. Hinton finished in 2:17.58.

What Zamzow did was break the school record in the event. Her victory in the shot put was a big factor. Zamzow posted a mark of 39 feet, 9 3/4 inches to win the event.

Also competing in the pentathlon were Georgia Wahl and Virginia Preiss. They finished in fifth and sixth, combining to score seven points for the team total.

In the heptathlon, UT’s George Patrick leads with 3,307 points. Erin Lopez of Texas Tech is second with 3,043.

The Longhorns got another win from Steffin McCarter in the men’s long jump. He posted a mark of 26-1 1/2 to take the Big 12 title, beating Charles Brown of Texas Tech by 1 1/4 inches. It was a personal best mark for McCarter and moved him to second in school history ahead of Eric Metcalf. He trails Marquise Goodwin’s record by seven inches.

Texas picked up another win in the men’s distance medley relay. Alex Rogers, Terry Brown Jr., Logan Emery and Sam Worley teamed up to win the event in 9:40.11. It was the first time Texas won the Big 12 title in the event since 2009.

Alan Zapalac finished second in the men’s weight throw with a distance of 70-9.

John Rice posted a personal best in the 5,000 meters with a time of 14:05.20. That was good for fifth place. Charles Mills was right behind him in sixth.

Kally Long was edged out in the women’s pole vault by Laura Taylor of Kansas. Long’s mark of 14-3/4 was two inches shy of Taylor’s height. Barrett Poth took fifth in the men’s event.