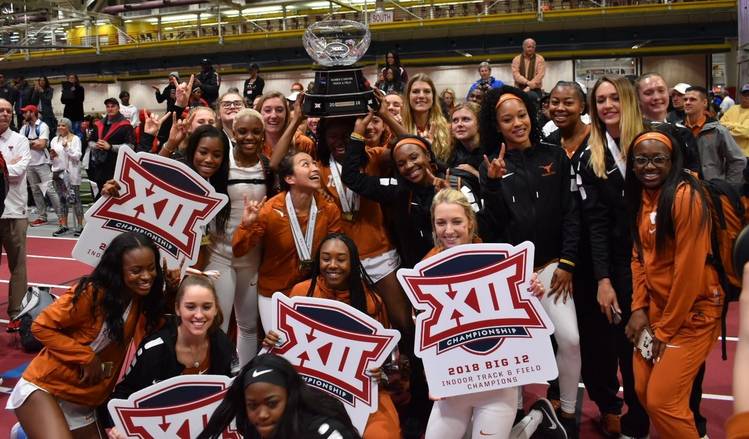 The Texas women scored 117 points to secure the Big 12 Indoor Track and Field Championship, edging out Kansas by five points in Ames, Iowa on Saturday.

The men came up 14 points short as Texas Tech scored 143 points to take the title.

The win for the women was good for their fourth Big 12 title in five years.

“What’s great is we came in here sitting anywhere from third to fifth but never gave up,” interim head coach Tonja Buford-Bailey said. “The moment we saw that, we decided we were going to find a way to pull this off. It started with the pentathlon.”

Ashtin Zamzow won the the pentathlon Friday, a first for the UT women.

The women made it a sweep in the 60-meter hurdles, taking the top three spots. Pedrya Seymour won in 8.09 seconds with Rushelle Burton taking second in 8.13. Ariel Jones rounded out the top-3 with a time of 8.25. On the men’s side, Medric Roberson and John Burt finished in fourth and fifth.

George Patrick highlighted the men’s team with a win in the heptathlon. He scored 5,552 points to join Zamzow as a winner of the multi-events.

“The hero of the group was George Patrick,” Buford-Bailey said. “He had an injury halfway through. He still came out and ran the hurdles final.”

In the 60 meters Teahna Daniels came up just short of winning with a time of 7.37. She was behind first place by .04 seconds.

O’Brien Wasome finished second in the men’s triple jump with a mark of 54-1/2.

Megan Rourke and Sydne Fowler earned valuable points in the 600 as they finished second and third. Rourke clocked in at 1:20.76 with Fowler finishing in 1:21.62.

Serenity Douglas took fourth in the 400 meters. She finished the race in 53.65. Douglas also finished sixth in the 200.

Preview: Texas at No. 8 Kansas