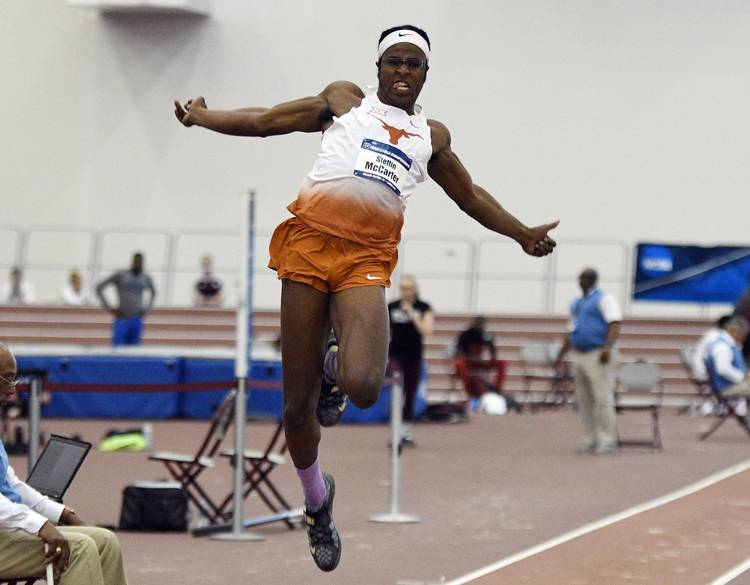 Steffin McCarter finished in the top eight in the long jump at the NCAA Indoor Championships for the second straight year. (Photo by UT Athletics)

“With Steffin McCarter, he even wants more, too. He wasn’t satisfied with his place,” UT interim head coach Tonja Buford-Bailey said. “He wants to be top three and go for the win at the outdoor meet.”

Piperi, a freshman, took seventh place in the shot put with a mark of 63 feet, 10 1/4 inches. He was one of three freshmen to make the top-eight podium in the event. Piperi is the first UT freshman to score at the national championship meet in the event since Ryan Crouser in 2012.

“Usually this is a really tough meet to even qualify for, so to come in and be able to perform at your best is really good for him as a freshman and I think it’s going to bode well for him in the outdoor season,” Buford-Bailey said.

George Patrick sits in 15th place in the heptathlon. He scored 3,086 points on the first day of competition with his best finish, eighth place, coming in the 60 meters. As a result, he trails first place Tim Duckworth of Kentucky by 515 points.

Sam Worley finished the mile race in 4:09.65, unable to qualify for the final. He had to navigate past a runner who fell, causing him to lose some time.

Teahna Daniels was .03 seconds from qualifying for the 60-meter final. She finished her preliminary heat in 7.24.

Texas had two runners in the women’s 60-meter hurdles prelim. Neither was able to qualify for the final, however. Pedrya Semour finished the race in 8.13 while Rushelle Burton clocked in at 8.15. The final qualifying time was 8.114.

The final day of the NCAA Indoor Championships starts at noon Saturday. Alan Zapalac will compete in the weight throw while Kally Long will compete in the pole vault. Patrick will finish up heptathlon competition while Texas will also run in the women’s 1600 relay.

The No. 1 player on the Fabulous 55, Jordan Whittington, picks Texas