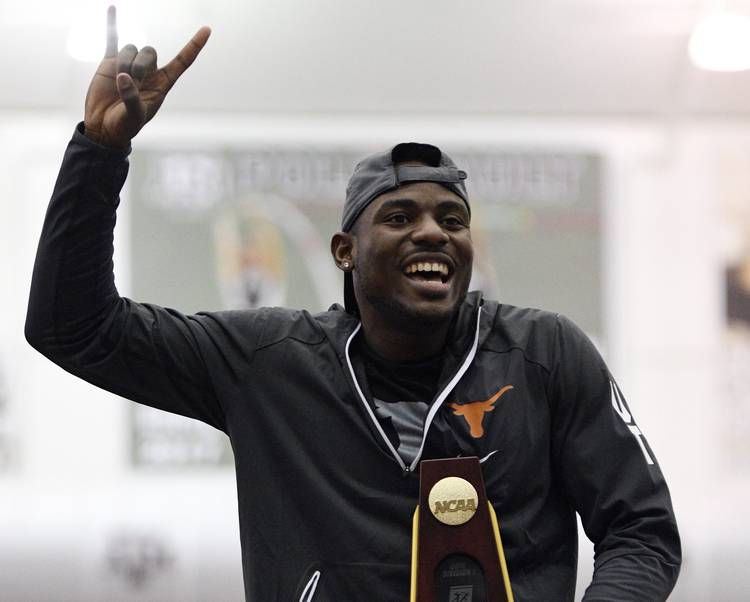 O'Brien Wasome set a school record on his way to winning the NCAA Championship in the triple jump at the NCAA Indoor Track and Field Championships on March 10, 2018. (Photo by UT Athletics)

Zapalac took eighth place in the men’s weight throw with a school record mark of 72-8. The fifth-year senior hadn’t been to the NCAA Championships before and made his lone appearance count.

“I don’t know what to do. I’ve never been so happy to finish in eighth place,” Zapalac said. “Four years of work and it all pays off in the end. It was worth it. The four years was all worth it.”

Zapalac broke the record set by Dylan Armstrong in 2001.

“This has been a long time coming for Alan. To break the school record on his last throw of his senior year is a testament to his hard work and dedication,” associate head coach Ty Sevin said. “I told him before his last throw that this is why he stayed in Austin every summer to work out and get stronger. This is your last throw and your chance to write your legacy yourself instead of having it dictated to you. I’m so proud of him.”

George Patrick finished off the heptathlon, moving up one spot to take 14th place. He scored 5,398 points. Patrick’s highest-scoring finish came in the 60-meter hurdles. He took fourth place in the event after running an 8.15.

The Longhorns women’s 1600 relay team finished in eighth with a time of 3:33.06. It was their best time of the season.

The track and field squad will now turn its attention to the outdoor season, which starts next week at UTSA.