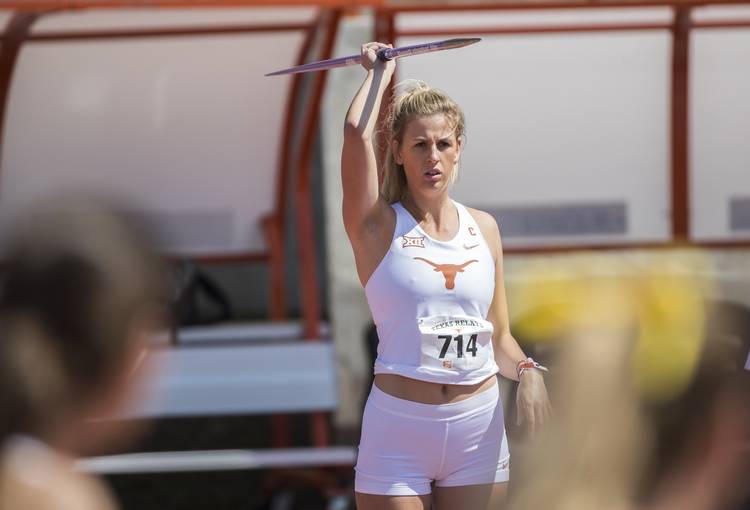 Texas senior Haley Crouser competes in the javelin at the Texas Relays at Mike A. Myers Stadium on March 30, 2018. RICARDO B. BRAZZIELL / AMERICAN-STATESMAN

Haley Crouser set a school record as she took the top spot in the women’s javelin event on the first day of the Big 12 Championships in Waco Friday.

Fabian Dohmann won the men’s event for his second Big 12 title and a clean sweep for the Longhorns in the event.

The previous school record was set in 1988. Crouser beat the mark by two centimeters. It was the seventh-best throw in the NCAA this season.

“It has been a goal of mine since I got here,” said Crouser of the record. “It’s been a long time coming so I’m really happy. I like being able to kind of start Texas off strong, and I know we’re a powerhouse this year and can do a lot of damage.”

The Texas women are currently in fourth place through three of the 21 events. They have 18 points and trail first place Kansas State by four points.

Dohmann’s performance helped the men get out to a lead. His throw of 238 feet earned ten team points. Texas has 26 points to lead second place Kansas State by six.

Steele Wasik took fifth place in the men’s javelin with a mark of 207-4, a personal best. Wasik is also in first place of the decathlon through five events. He has 3,960 points. Wasik won the shot put and high jump while taking second in the 100 meters.

The men also had strong performances in the hammer throw. Alan Zapalac posted a personal best of 238 feet for a third-place finish.

Texas men’s tennis cruises to second round of NCAA tournament