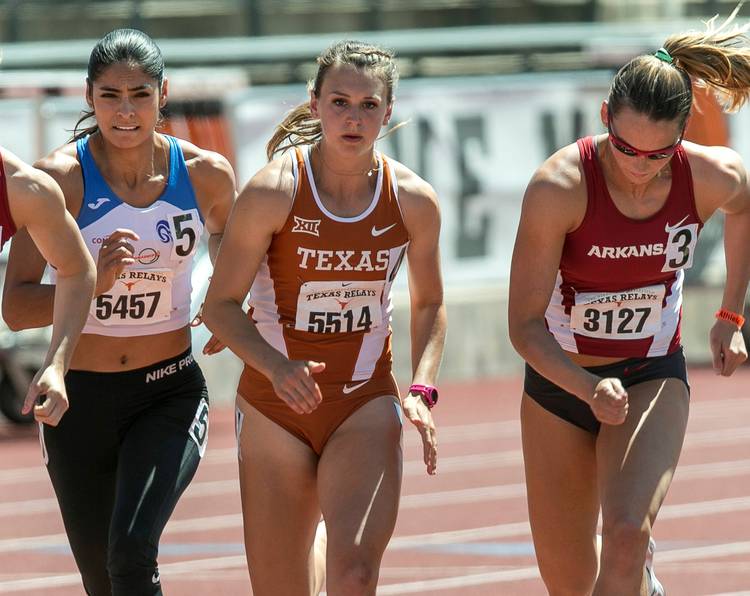 Texas' Ashtin Zamzow, third from the left, starts the 800 meter run in heptathlon event during the 2016 Texas Relays held at Mike A. Myers Stadium. This year, she leads the heptathlon after the first day Wednesday. (RODOLFO GONZALEZ/STATESMAN FILE)

The Texas track and field team took one victory, a second-place finish and set two school records on the first day of the Big 12 Indoor Championships in Lubbock Friday.

A first-place finish by Ashtin Zamzow in the pentathlon highlighted the day for Texas. She scored 4,183 points to set a personal best and school record. Zamzow’s win earned the women ten team points. Virginia Preiss earned three team points with her sixth-place finish. The women currently sit in third place with 34 points.

“It was awesome,” Bruckner said. “Last night during our meeting, we were setting goals and my goal was to take second. I went in seeded fourth, so I went in with that goal knowing that I could take second.”

Georgia Wahl also scored eight points for Texas with her second-place performance in the long jump. She set a mark of 20-7 for a personal best.

Kynnedy Flannel, Teahna Daniels, Gabby Crank and Alex Cruz each advanced to finals with first-place finishes in heats. Flannel topped the competition in the 200 meters. Daniels matched Flannel’s time in the 60 meters and both qualified first in the event. Crank finished first in her heat in the 800 meters while Cruz topped the competition in the mile.

On the men’s side, Alex Loving sits in fourth in the heptathlon after the first day. He won the 60 meters and has 3,067 points through four events.

The men’s highest-scoring event on the day was a fourth-place finish in the distance medley relay. Charles Mills, Jonathan Jones, Sam Worley and Alex Rogers finished in 10:00.43 to earn five team points.

Steffin McCarter earned four team points after taking fifth in the long jump with a mark of 25-5.

The men sit in sixth place with 13.5 points with a lot of action scheduled for Saturday.