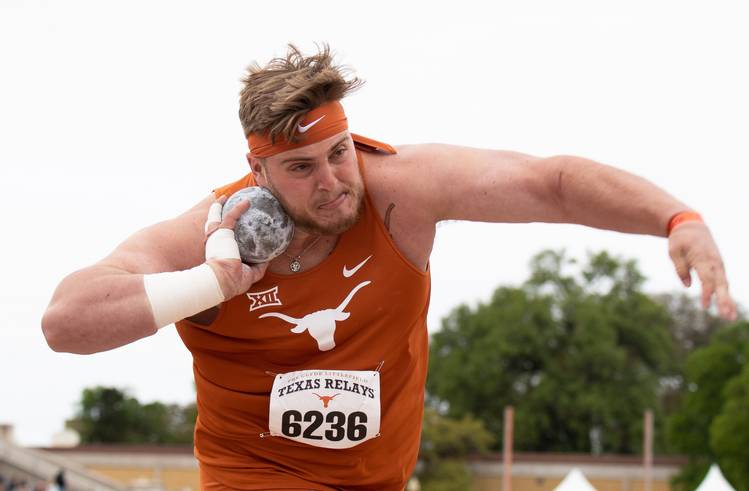 Ashtin Zamzow and Tripp Piperi took home Big 12 crowns to highlight the second day of the Big 12 Championships in Norman, Okla., on Saturday.

Zamzow scored 5,817 points and is the first Longhorn to win the heptathlon in the Big 12 era. That makes two Big 12 titles for Zamzow as the Longhorns swept the javelin events Friday.

Zamzow and Trevor Danielson came away with the wins for the Longhorns on the first day of competition. Zamzow made it three straight UT titles in the javelin with a 159-4, and Danielson posted a stadium record of 244-4.

“I was excited to be the first thrower of the competition and get things started,” Danielson said. “I had a solid series of throws, but the primary goal was always to score 10 points for the team.”

Texas got another win, this time in the long jump, when Steffin McCarter posted a mark of 26-¼.

Zamzow’s performance in javelin was just one highlight of Friday’s competition. She also finished the day with the lead in the heptathlon through four events. Zamzow scored 3,482 points, won the shot put and posted a personal record of 13.44 seconds in her 100-meter hurdles victory. She finished second in the 200 meters and took third in the high jump.

“I’m excited I could pick up 10 points for my team in the javelin,” Zamzow said. “It made me feel a little better with my heptathlon performance today, but there’s still a lot of points left on the table. I’m hoping to come out with a better second day and another win for the team.”

She did just that Saturday.

Also Saturday, Georgia Wahl took fourth place in the long jump with a mark of 19-11¾. Elena Bruckner added a fourth-place in the women’s shot put while Anna McDonald took third in the 3,000-meter steeplechase. On the men’s side, John Rice took second in the steeplechase.

Dick Tomey, who sparked one transformational year at Texas in 2004, dies of cancer