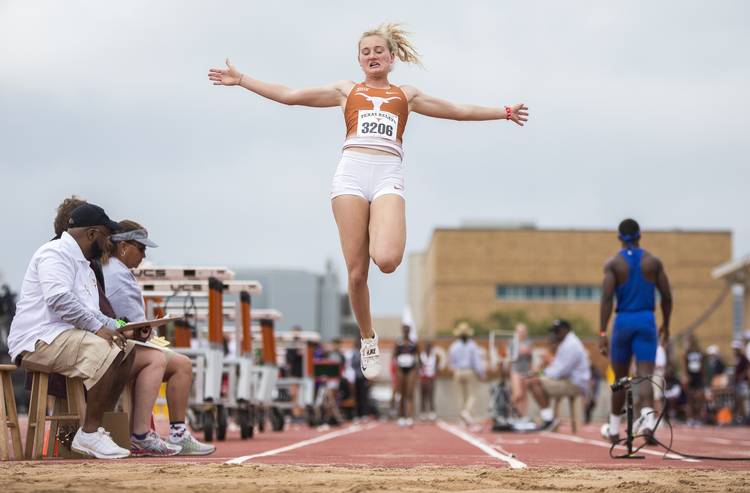 Texas sophomore Sophia Falco competes in the long jump at the Texas Relays at Myers Stadium in Austin on March 29, 2019. [RICARDO B. BRAZZIELL/AMERICAN-STATESMAN]

The Texas track and field squad had a couple of athletes qualify for the NCAA Championships during the NCAA West Preliminaries in Sacramento, Calif., on Thursday.

Nine more Longhorns advanced to the quarterfinal round of their events.

Steffin McCarter and Sophia Falco both qualified for the NCAA Championship in the long jump, which will take place at UT’s Myers Stadium beginning June 5.

Sam Worley finished the 1,500 meters in 3 minutes, 44.13 seconds to take first place in the first round of the event.

Teahna Daniels also won her first-round heat in the 100 meters with a time of 11.33. She had the fourth-best overall time.

Jonathan Jones finished the 400 meters ninth overall in the first round, winning his heat in 46.38.

Daniels and Jones were set to run again late Friday.

In the women’s 400 meters, multiple Longhorns moved on to the next round. Zola Golden, Kennedy Simon and Serenity Douglas all qualified in the event.

Mariam Abdul-Rashid and Sanique Walker moved on in the 400-meter hurdles.

Alex Cruz hit a personal best with his time of 4:21.39 in the men’s 1,500 meters. That qualified for the quarterfinals on Saturday.