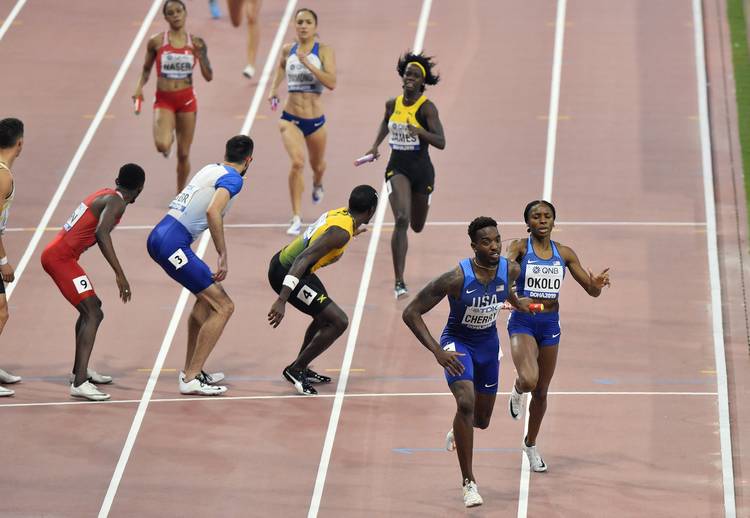 Fourteen athletes affiliated with the University of Texas track and field program traveled to Doha, Qatar last week to compete at the IAAF World Championships, where they earned five medals in six different events.

The Longhorn contingent’s results were highlighted by Courtney Okolo, who won two gold medals in the 4×400-meter and mixed 4×400-meter relays. Her 50.0 split helped set a world record of 3:09.34 in the latter event, a brand-new race that requires each team to run two men and two women in any order. USATF legend Allyson Felix also ran on that relay to earn the 12th world championships gold medal of her career, which broke her tie with Usain Bolt for the most in history.

Team USA did the dang thing! 💥

3:22.96 to win the heat at #WorldAthleticsChamps with @allysonfelix putting in some WORK on the second leg 💪 pic.twitter.com/Pcmit4KRVU

Okolo also contributed a quick 49.9 leg in the preliminary round of the 4x400m; the Americans won gold in the final with a different line-up of women.

In the 4×100-meter relay, Teahna Daniels and Morolake Akinosun teamed up to help Team USA earn the bronze medal. Daniels, the U.S. champion for 100 meters, ran second leg and Akinosun ran third on the squad, which finished with a time of 42.10 behind Jamaica (41.44) and Great Britain (41.85).

Bronze for @usatf in the women's 4x100m relay! 🥉 #WorldAthleticsChamps pic.twitter.com/0bm125rRzX

What a race 👏 What a run 👏@ItsPooda is a world champion 🥇 and @Ken_AYE_ takes home silver 🥈 in the women's 100m hurdles final. #WorldAthleticsChamps pic.twitter.com/RkOX1emybw

Ryan Crouser took home a silver medal in a tightly contested shot put competition that saw fellow American Joe Kovacs narrowly win with a throw of 22.91m over Crouser and New Zealand’s Tom Walsh, both whom threw for 22.90m.

See below for the rest of the Longhorns’ results:

Longhorn Confidential: Texas-OU: Who’s got the edge, who will emerge as a Heisman candidate?

Healthy again, Texas’ B.J. Foster gets back to his heat-seeking ways