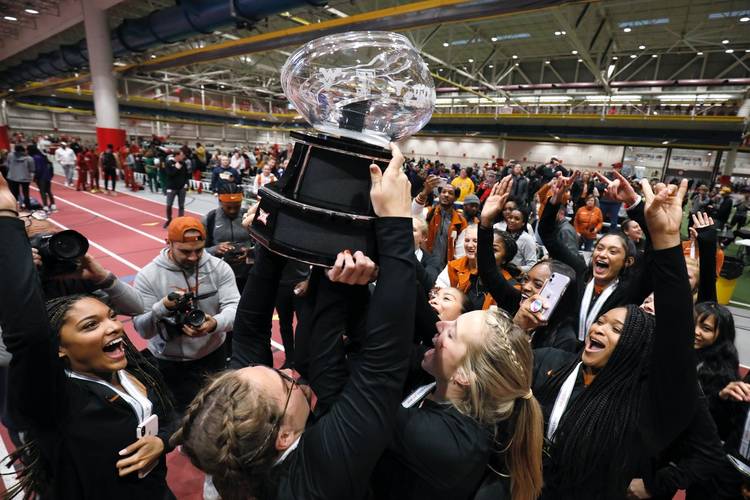 AMES, Iowa — The Texas women won their third consecutive indoor track and field team title at the Big 12 Championships this weekend, setting a conference record with an astounding 180.33 points across all event disciplines.

The men’s team, considered the pre-meet favorite to topple two-time defending champion Texas Tech, suffered disqualifications and injuries in several key events and had to settle for third with 118 points as Iowa State won its first-ever indoor conference title at home.

Four women tied for high point scorer of the weekend, including two Longhorns: sophomore Julien Alfred, who won the 60-meter and 200-meter dashes; and graduate student Kathryn Gillespie, who won mile and 800-meter titles Saturday.  Both women also contributed strong legs to winning relay teams: Alfred on the 4×400-meter relay and Gillespie on the distance medley, though relay points are not factored into consideration for high point scorer honors.

Alfred was highly favored to win the 60 as the collegiate leader in the event, though it took a meet record effort of 7.15 seconds to claim the title over Oklahoma State’s Aaliyah Birmingham. The time broke a 23-year-old facility record and the 16-year-old meet record held by Longhorns legend Sanya Richards-Ross.

Her personal best this season of 7.10 is not far from the collegiate record of 7.07, which Aleia Hobbs of LSU and Hannah Cunliffe of Oregon co-own.

Alfred’s victory in the 200 was a surprise, though, as she was seeded in the slow heat of the two-section final. Her winning time of 23.02 held up as the fastest of the day, and she became the first Texas woman to win the Big 12 60 and 200 titles since Marshevet Hooker in 2006.

UT coach Edrick Floréal attributes Alfred’s huge improvement this season to fall conditioning. The St. Lucia native didn’t arrive on campus until January 2019, which put her behind the other athletes. She was fifth in the Big 12 60 final last year, then placed second in the 100 and third in 200 outdoors, but she missed the rest of the postseason when she tripped and fell at the NCAA West Preliminary Round.

“I am very hungry for this season,” Alfred said. “When I went out last season, it made me feel bad I missed out so much. I need to get my team points at the national level.”

Gillespie, a graduate student from Scotland who previously competed for Harvard, has shined as a new leader for the distance program this year. She dominated each of her races, breaking the field open at a strategic moment and setting a pace that no one else could match in the 1,200-meter leg of the distance medley as well as the mile (4:36.89) and 800 (2:06.33).

“(If you) make a break early and suddenly change pace, that takes people some time to react and respond,” she said of her winning strategy. “Sometimes, if you can establish a gap, you have it in the bag early on.”

She claims her second Big 12 title of the weekend in 4:36.89 – the second-fastest indoor mile in UT history. She owns the school-record time, too… 🥇#FamilyOnAMission | #HookEm 🤘 pic.twitter.com/NVofxddQvo

Other standout performances on the women’s side included Kennedy Simon’s 400 win in 51.81, the second-fastest time in the NCAA this season. She also anchored the Longhorns’ 4×400-meter relay in 51.49 for a 3:32.64 winning time. Freshman Brooke Jaworski won the 600-yard run in 1:19.14 and contributed legs on the winning distance medley and 4×400-meter relays. Senior Elena Bruckner won her first-ever Big 12 title with a throw of 55 feet, 2¼ inches in the shot put.

Tara Davis made her debut in burnt orange count by earning a silver medal in the 60-meter hurdles with a time of 8.29. That’s far from her best of 7.98, but the former University of Georgia All-American cried tears of joy just to compete again. She was forced to sit out the 2018-19 season after transferring and suffered a potentially season-ending injury during practice in January of this year.

It’s been 629 days since i’ve stepped foot onto the NCAA scene, i’m back and y’all boutta see something different. Outdoor get ready…. pic.twitter.com/4qsHHFSOz2

The Texas women have now won six of the past seven Big 12 indoor titles. The team was hoping to sweep the men’s and women’s titles for the first time since 2015.

“I’ve got to get our guys to the point where we can be consistently winning like the women are,” Floréal said. “That’s our mission.”

On paper, the men’s team is the best in the conference and will contend for the national title in Albuquerque, N.M., later this month. However, top distance runner Sam Worley fractured his tibia two weeks ago during a race at the University of Washington, and that took him out for the rest of the indoor season. Another potential distance scorer, John Rice, did not compete due to a foot injury.

Even without their star distance runners, the Longhorns stepped up and took runner-up honors in the distance medley relay thanks to a gutsy anchor leg by Brendon Hebert. But Hebert took two steps out of bounds while boxed in, enough to disqualify the entire relay and put the Longhorns out eight points.

Earlier on Day 1, junior Micaiah Harris false-started during the preliminary round of the 60 meters, resulting in another disqualification. He would return the next day to win the 200 in 20.65.

“They got a term in baseball, you got to wipe it off,” Floréal says of Harris’ DQ. “Try not to let him dwell on it. He was pretty bummed he let the team down, and my goal was to get him back to prepare to run the 200. I told him, ‘Forget that. We have to deal with whatever mistakes you made at home. Now is not the time to deal with what went wrong. No one cares. We have to move on.’ ”

Harris later came back and contributed a leg to the Longhorns’ 4×400-meter relay, which placed fourth in 3:08.07.

A preview to whats about to unfold. pic.twitter.com/RcneSactPf

Other event champions for the men were senior O’Brien Wasome, who won both the long (26-3) and triple jumps (52-10¾); sophomore Jonathan Jones, who won the 400 in 45.9; senior dual-sport athlete John Burt, who skipped the NFL combine to defend his 60-meter hurdles title in 7.71; freshman Leo Neugebauer, who won the heptathlon with 5,848 points; and junior Tripp Piperi, who won the shot put with a top throw of 68-10.

Floréal is already looking ahead to nationals, where he thinks both teams can make the podium by finishing in the top four.

“I think they’re very hungry,” he said of the men. With the injuries and disqualifications, “if you put all those points together, we’re conference champions, and the guys are aware of that and that’s fueling the fire for NCAA indoor.”

The UT men can take a little inspiration from the spirited women’s squad.