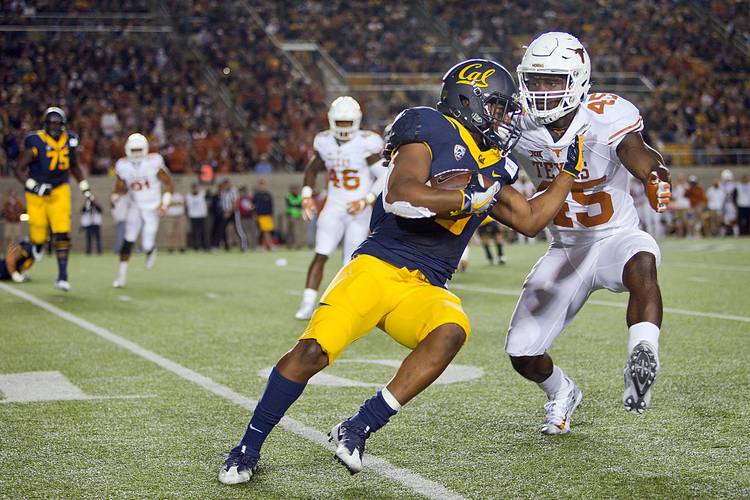 Running back Tre Watson #5 of the California Golden Bears pulls in a pass against linebacker Anthony Wheeler #45 the Texas Longhorns in the first quarter on September 17, 2016 at California Memorial Stadium in Berkeley, California. Cal won 50-43. (Photo by Brian Bahr/Getty Images)

For those who are wondering if the Texas offense will be stuck in neutral for a second straight year, things are looking up.

Coach Tom Herman has landed a nice find in Cal running back Tre Watson, who’s coming in as a graduate transfer. If ever an offense need an infusion of proven talent in the backfield, it’s this one.

Watson, at 5-11 and 205 pounds, runs well between the tackles and, more important, brings the dynamic of being a pass catcher to the table. In 2016 he ran for 709 yards and averaged five yards per carry and caught 21 passes for 241 yards and four touchdowns.

The Horns are excited about the impending arrival of Carthage prep All-American Keaontay Ingram, but this signing should ease any concern about a lack of productivity in the backfield. Watson totaled more than 2,400 all-purpose yards at Cal. In his lone appearance at Royal-Memorial Stadium, Watson ran nine times for 37 yards in Cal’s 45-44 win over Texas, a game that will always be remembered for kicker Nick Rose missing an extra point that would have sent the game into overtime.

Watson played only two games in 2017, tearing his ACL against Weber State. He announced his intention to transfer following the season and chose the Horns over LSU and Texas Tech.

He brings experience to this offense. Better yet, how many times can you remember in recent years a Texas quarterback dumping a ball off to a running back who took it 40 yards to the house? Once? Twice?

Longhorns legend Keith Moreland told me early in the season that Texas would have a legitimate chance to win the league. One of the reasons he gave was that the league would be down compared to recent years.

The Frogs, who have played in four straight College World Series, are without slugger Luken Baker, who was lost for the season after he broke his leg on the basepaths three weeks ago. TCU ends the regular season next week with three games at UFCU Disch-Falk Field.

As for the Horns, they have gotten here on their own merit, not the struggles of others. Coach David Pierce has found his offensive groove behind team leader Kody Clemens, who tied Sunday’s game in Lubbock with a two-run homer, and redshirt freshman Zach Zubia, whose two-run homer in the seventh put the Horns ahead to stay.

The Horns haven’t had two players reach double-digit homers in the same season since Kevin Keyes, Kevin Lusson and Cameron Rupp did it in 2010. That group hit 81 homers, the most of any of Garrido’s 20 teams at Texas.

For the rest of Cedric’s Nuggets, including information on the Austin Film Society’s celebration of Augie Garrido, click here.