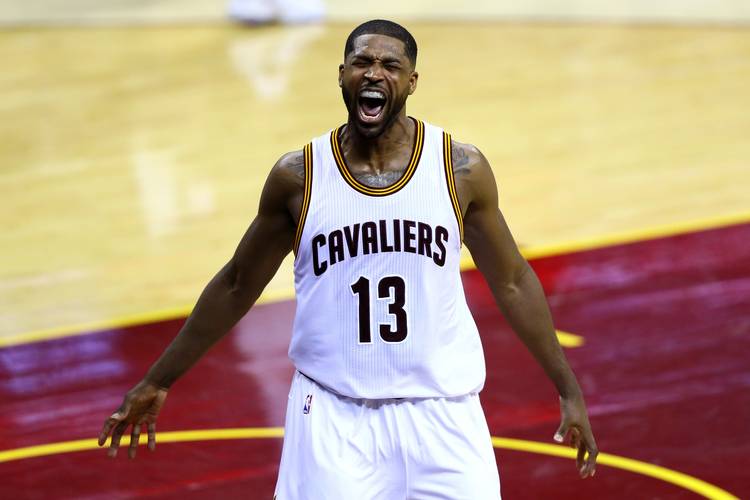 Tristan Thompson #13 of the Cleveland Cavaliers reacts during the first half against the Golden State Warriors in Game 6 of the 2016 NBA Finals at Quicken Loans Arena on June 16, 2016 in Cleveland, Ohio. (Photo by Ezra Shaw/Getty Images)

The Cleveland Cavaliers are back in this series mostly because of the scoring exploits of LeBron James and Kyrie Irving but it would be just plain stupid to overlook the contribution of Texas ex Tristan Thompson.

Dude has been double-double trouble for the Warriors.

Golden State has no answer for the young center who has out-hustled, out-rebounded, and out-physicaled the Warriors’ big-man contingent, which took a hit when center Andrew Bogut was lost for the series after a Game 5 knee injury.

Thompson, called Double T by James, is averaging 10.3 points and 10.8 rebounds in the Finals and quickly becoming the unsung hero of Cleveland’s story.
In what can best be described as a season saver, Thompson had the best game of his career in Game 6 with 15 points, 16 rebounds, and three assists in 43 clutch minutes as Cleveland evened the series at three games each with a 115-101 win Thursday night.

What didn’t show in the boxscore was Thompson’s disruptive defense, which made life miserable for the Warriors on the perimeter. Golden State killed opponents all season with a sharp screen game which allowed sharp shooters Steph Curry and Klay Thompson to spring open for three-pointers.

The 6-foot-9 Thompson has been really pesky — reminiscent of Dennis Rodman’s role with the Chicago Bulls — by using his length and quickness to give his team an advantage in athleticism among bigs in this series.
Thompson has made life much harder for the Splash Brothers, often switching on picks and holding his own in one-on-one situations on the perimeter against the league’s two best three-point shooters.

“He’s very important to what we’re trying to do,” coach Tyronn Lue said in his postgame interview. “Defensively being able to switch one through five on him is great for us so we need him on the floor.”

Thompson has come a long way from the offensive-challenged swingman who famously changed his free-throw shooting routine from lefthanded to right-handed after college. His team was criticized in some circles for awarding him a five-year, $82 million contract in 2015 because he was largely known as a one-trick pony — a good offensive rebounder who wouldn’t give the team much in the way of scoring.

Turns out the Cavs knew what they were doing. Thompson is one of the most athletic big men in the league and has saved his best offense for the most important series of his career. More important, he’s on the cusp of winning his first NBA championship.

UCLA’s John Savage turns down offer from Texas — now what?