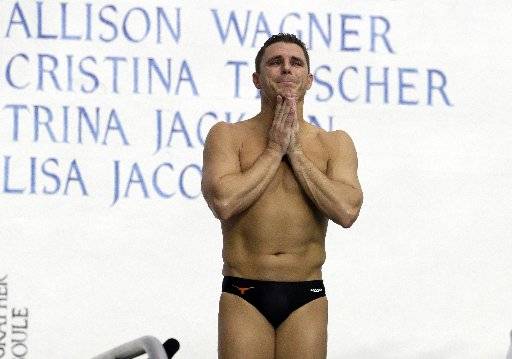 Troy Dumais reacts to the crowd as he waits to performs his final dive during the men's 3-meter springboard final at the U.S. Olympic diving trials in Indianapolis, Saturday, June 25, 2016. (AP Photo/Michael Conroy)

INDIANAPOLIS (AP) — With one long hug and a few brief words, Troy Dumais asked Kristian Ipsen to carry on the legacy of American diving.
Ipsen smiled, Dumais choked back tears and now the two longtime synchro partners are heading in drastically different directions.
On Saturday, Ipsen and Michael Hixon took the two Olympic spots in men’s 3-meter, while Dumais’ bid to become the first U.S. man to dive in five Olympic Games came to an end.
“It was cool because he just said ‘You’re going to kill it,’” Ipsen said after winning with the event with a score of 1,452.75 points. “It’s pretty awesome. He’s been to four Olympics now, so for him to say that was like passing on the torch. It was a really cool moment.”
Jessica Parratto and Katrina Young enjoyed their day, too, making the U.S. team in women’s 10-meter. Young moved up two places on her final three dives to qualify.
For Ipsen and Hixon, it was a bittersweet moment.
While Ipsen is headed to his second straight Olympics and will compete in Rio in his first individual event, he wanted to win another medal with Dumais in 3-meter springboard. They earned a bronze four years ago but finished second at the trials in an event that only had one spot available.
Hixon’s score of 1,385.45 assured him of qualifying in both 3-meter events but even the first-time Olympian kept his joy in check — knowing this would be the end of Dumais’ diving career.
“I just told him I loved him and thank you,” Hixon said. “We trained together at Texas for a year. He’s done a lot for USA Diving and he’s been a tremendous mentor to so many kids coming up that it seems like thank you doesn’t quite cut it.”
Fans at the Indiana University Natatorium felt the same way.
When the 36-year-old Dumais stepped onto the springboard for the final dive of his final event, already out of contention, the biggest crowd of the week roared so loud for so long that Dumais bent over, wiped his eyes and waved to the crowd before making that short jog one last time. He scored a 71.4 on the dive and wound up fourth overall at 1,287.4.
“What a way to go out, huh? A standing ovation in front of my family,” he said through reddened eyes. “It’s a dive I’ll always relive in my mind — standing on the board, seeing the people. It was actually hard to do.”
But as he has done so many times before, Dumais got the dive done and then graciously accepted his fate.
If anyone was to derail Dumais, he would have wanted it to be Ipsen, who made it look easy.
The semifinal leader extended his lead on three of the first four dives and sealed his spot when Hixon nearly smacked his back on the water and was given a 17.5 on his fourth dive.
The miss gave Dumais a brief opening, but Hixon rebounded with a 91.2 and a 95.2 on his final two dives to hold on.
“I’m very excited,” Ipsen said. “It’s been a really long week, a lot of ups and downs. It’s been super emotional, especially with Troy and his last dive. But I’m really happy it went the way it did for me today.”
Parratto led going into the finals and maintained her lead all night. She finished with a score of 1,030.05 to qualify for her second event this week. Parratto and Amy Cozad also will represent the U.S. in synchro 10-meter.
The fight for second was the most interesting competition all week.
Texas junior Murphy Bromberg started the night in second, while Cozad was third and Young was fourth. Cozad jumped into the No. 2 spot after her first dive but Bromberg reclaimed it after her second dive. Bromberg fell to fourth after receiving a 37.95 on her third dive and Cozad faltered on her final two attempts, scoring 44.55 and 46.4.
Young, meanwhile, moved up with scores of 72.0, 62.8 and 76.8. She finished with a 982.1 to beat out Bromberg’s 958.4. Cozad finished fourth.
“It feels great, it hasn’t sunk in yet,” said Young, who had never finished higher than fourth at the NCAA championships. “Honestly, I felt like I really could do this for a long time.”