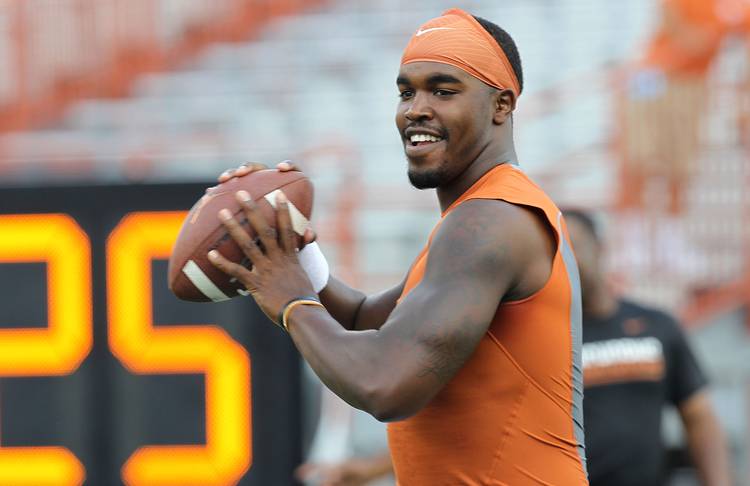 On what award should be bestowed to Tyrone Swoopes:

I’d like to nominate Tyrone Swoopes for the most-selfless athlete in America. The young man has taken a verbal beating from fans and media, but he has humbly taken a backseat for the good of the team. He still has a huge role with this team, too. … Defensive end Naashon Hughes loved the rambunctious sellout crowd at DKR and added, “I hope they seal the end zones off and make it a dome.” … Did you see where Chad Ochocinco tweeted about Texas receiver John Burt? He wrote “that No. 1 can flat out fly.”

On what Longhorns impressed one NFL draft analyst on Sunday night:

NFL draft analyst Lance Zierlein of Houston was on hand at the Notre Dame-Texas game to scout players, as was Texans general manager Rick Smith. Zierlein loves the upside of Texas left tackle Connor Williams, whom he calls “one of the most talented and technically proficient tackles I studied all summer long. I think he’ll be considered in the same class as Florida State’s Roderick Johnson and Alabama’s Cam Robinson by the end of the year.” Zierlein also gives high marks to Longhorns running backs D’Onta Foreman and Chris Warren III as well as to Notre Dame’s left tackle Mike McGlinchey, down lineman Isaac Rochelle and Jarron Jones and cornerback Cole Luke, the nephew of former Dallas Cowboys safety great Darren Woodson.

For the rest of Kirk’s 9 Things, including his thoughts on Tom Herman’s Houston Cougars, Kevin Sumlin’s first game of 2016 and who will try to hire OC Sterlin Gilbert, click here.