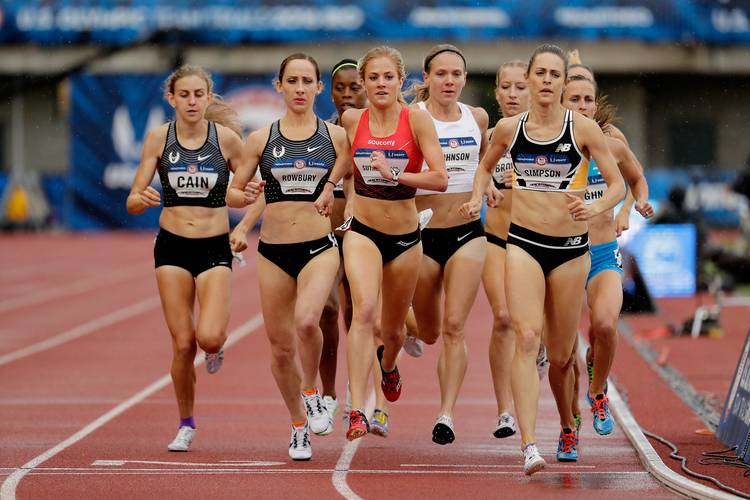 EUGENE, OR - JULY 07: Jenny Simpson and Sara Sutherland compete in the first round of the Women's 1500 Meter during the 2016 U.S. Olympic Track & Field Team Trials at Hayward Field on July 7, 2016 in Eugene, Oregon. (Photo by Andy Lyons/Getty Images)

Six former and current Longhorns runners battled the rain to advance in their events on Friday at the U.S. Olympic Trials in Eugene, Ore.

Ashley Spencer and Byron Robinson both advanced in the 400-meter hurdles. Spencer finished the semifinal race in 55.41 to qualify No. 4 in the women’s event while Robinson qualified tenth with a time of 50.26 in the men’s event. Robinson was the last to qualify and did so by just .01 seconds on his way to becoming the only collegiate runner in the final.

“Just to be here and know that I belong with these guys, it feels good,” Robinson said. “I know I can run a whole lot faster than I did today. It just wasn’t there for me, but I made it to the finals. That’s all I needed to do.”

In the women’s 200-meter event Morolake Akinosun advanced to the semifinals with a tenth place time of 22.99. Alex Anderson failed to qualify, finishing 21st with a time of 23.29.

On the men’s side, Aldrich Bailey Jr. finished the 200 meters in 20.82 for 15th place, missing out on the final. He qualified for both the 200 and 400 semifinals as he’s set to enter his senior season at Texas.

In middle distance running, Leo Manzano and Kyler Merber both advanced in the men’s 1,500 meters. Manzano qualified fourth with a time of 3:44.57 while Merber finished the race in 3:48.30 to qualify 15th for the final.

Sara Sutherland finished her heat in seventh place, but her time of 4:11.92 in the women’s side of the 1,500 meters held up as she advanced with a tenth place ranking.

“Leo Manzano was definitely in the toughest heat. You can never count him out,” UT head coach Mario Sategna said. “Sara Sutherland getting through was great to see as well as Kyle Merber. Our distance alums are really running well here this week.”

Morgan Goodwin-Snow was in a tough field for the women’s 100-meter hurdles. She failed to qualify for the final with a time of 13.21.

Pole vaulter Kaitlin Petrillose was unable to clear the height of the qualifying round.

“This meet shows with our current student-athletes as well as our Texas Exes what the University of Texas provides,” Sategna said.