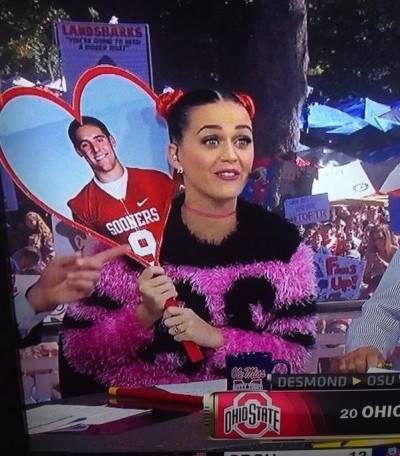 Maybe all that attention from Katy Perry got to Oklahoma quarterback Trevor Knight, Saturday, in the Sooners 37-33 loss to TCU.

It’s not often an international pop star unexpectedly gushes about any college quarterback.

Perry was a special guest of ESPN’s GameDay. The famous, traveling college football show was on site before Mississippi’s home game against Alabama. Perry’s manager is a Mississippi alum.

Perry pulled out a personal poster of Knight as she picked the Sooners to beat the Horned Frogs. Then she told Knight to call her. Maybe she wanted some company during her concert Monday night in Tulsa.

Knight said Monday that he hasn’t called Perry. Seems he doesn’t have her number.

A year ago, Beyonce posted a photo to her Instagram account showing her wearing a David Ash jersey as a bathing suit coverup. So then again, maybe pop stars have a fascination with Big 12 quarterbacks from the state of Texas.