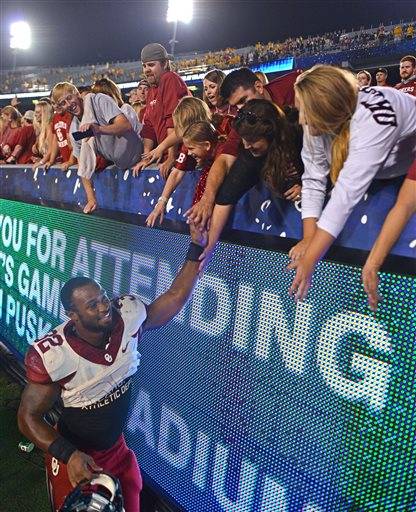 Each week of the football season, Bevo Beat will interview a reporter who covers Texas’ upcoming opponent. Jason Kersey, Oklahoma beat writer for The Oklahoman, answered five questions about the Bears. Follow him @jasonkersey. Texas and No. 11 Oklahoma clash at 11 a.m. Saturday at the Cotton Bowl.

A: Definitely, especially with all the teams that lost last weekend. The Sooners are going to need some help now, but I think Oklahoma still has a great chance to make the playoff. Obviously, another loss would be a dagger, and there now exist legitimate questions about this team’s offense and, perhaps more surprisingly, the defense.

Q: What hurt Oklahoma the most last week?

A: Offensive ineffectiveness. Trevor Knight wasn’t good at all in the second half, and it made a huge difference in the game. OU offensive coordinator Josh Heupel continued to try throwing the ball, even when it was clear that Knight wasn’t at his best, and that certainly didn’t help either. Having said all of that, if the defense had been even a little bit better before halftime, OU would have probably won the game. The loss truly was a team effort.

Q: How has Knight used last year’s spectacular effort in the Sugar Bowl (348 yards, four TDs in win over Alabama) as a springboard into his first full season as starter?

A: That hasn’t gone nearly as smoothly as many people (myself included) thought it would. Through the first four games, I’d call Knight’s performance solid, but definitely not spectacular. One of the biggest issues for Knight, though, isn’t his fault: He just doesn’t any consistently reliable options at receiver outside of Sterling Shepard. Durron Neal has played well at times, but he’s also dropped some passes. Until someone else steps up in the passing game, it’ll be hard for Knight to ever replicate that night in New Orleans.

Q: OU loses five-star freshman running back Joe Mixon to a season-long suspension but doesn’t flinch, replacing him with another freshman in Samaje Perine. Did anyone think Perine would be this good this soon?

A: It’s funny, because during the summer and preseason (before Mixon’s legal issues), every time anyone would ask Bob Stoops or running backs coach Cale Gundy about Mixon, they would almost always shift the discussion to Perine, and then talk more about him than Mixon. I do think the coaches saw it coming, but outside of that, I’m not sure anyone did. Perine is outstanding, though, and has a chance to be really special by the time it’s all said and done.

Q: This will be Stoops’ first Texas-OU game against a coach other than Mack Brown. How does his approach change, if at all, facing Charlie Strong?

A: He’s insisting that it doesn’t really change, and I believe him. Bob isn’t the type of guy who gets caught up in some of this stuff, so I imagine he’s approaching Texas week the way he always has. One change in approach this week has nothing to do with Charlie Strong or Mack Brown, but everything to do with the fact that OU lost last week. Stoops has only lost consecutive games once in his OU career, and that was in 2003. Something seems to change the week after a loss for Stoops, and it usually isn’t good for the opposition.