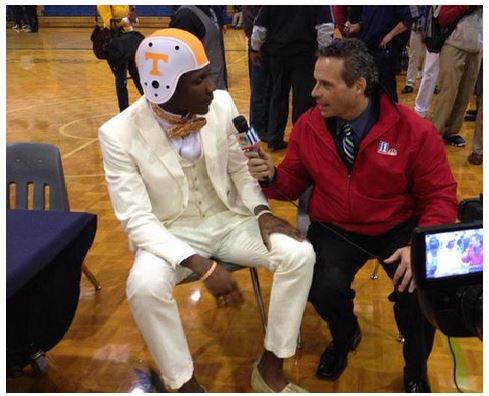 Now that Charlie Strong’s presser is over and the day is officially done for this year’s recruiting class, we turn our attention to the social media highlights of the day. The postings below are a sampling of thoughts and photos of this morning’s activity.

Malik Jefferson re-affirms his commitment to the Bevos:

I would like to announce I'm re-committing to the University of Texas, because I love it here 🐂! #HOOKEM

It was down to UT and UCLA for 5-star Plano West RB Soso Jamabo. He chose the Bruins and let the world know why:

The other UT had a recruit who was obviously fully “committed” to the Volunteers. Preston Williams is a dapper young man:

Houston Lamar CB Holton Hill signed with the ‘Horns. He’s bringing the “juice” back to the Longhorn-Aggie rivalry with this tweet that should have been titled “Scoreboard.”

Outside looking In Now Tell Me What You See !#LetsRide m/ 🐂🏈 pic.twitter.com/PoXXSJT8SN

Texas A&M has gone all-in on social media, give their recruiting hostesses a Twitter account – @AggieHostesses. Here they welcome the state’s top DT Daylon Mack who dabbled with signing with TCU or UT, but went back to A&M after previously decommitting.

THANKS AND GIG 'EM!

Rockwall RB Chris Warren was down to two schools on signing day – UT and Washington. It was a coin-flip decision. Literally.

In his new role as Auburn’s defensive coordinator, former Longhorns DC Will Muschamp snagged, by some accounts, the country’s top overall recruit DE Byron Cowart. A peek into the the Tigers war-room showed Muschamp (seated in blue on let) “excited.”