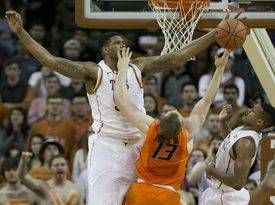 Kirk Bohls and Brian Davis are live tweeting from Texas’ first game of the NCAA Tournament.

In other Big 12 action this afternoon, UAB upset Iowa State, 60-59, which busted the American-Statesman’s Cedric Golden’s bracket (and probably a few others). Several people took to Twitter with their reactions from the game, with one tweeter even dubbing the Blazers the UABracket Busters.

Meanwhile, the No. 3 Baylor Bears were stunned by 14th seed Georgia State, 57-56, after R.J. Hunter sank a three-pointer with three seconds left. The best part of the shot could be the reaction of Hunter’s dad, the Georgia State coach, who fell off his stool.