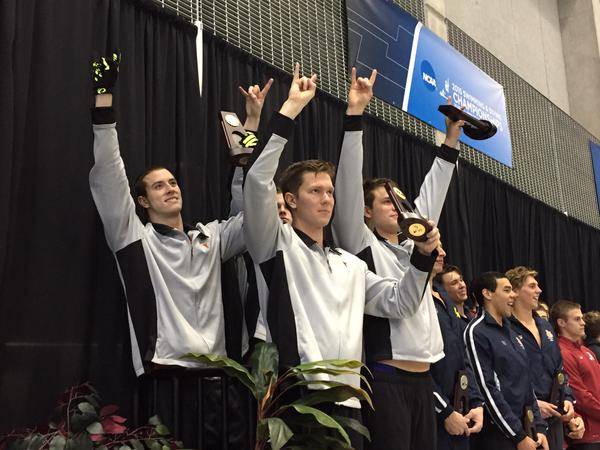 Texas won three national titles and posted a runnerup finish to take a commanding lead at the NCAA swimming and diving championships.

The Longhorns won both relays. And sophomore Clark Smith was victorious in the 500-yard freestyle for the program’s first victory in the event.

UT capped the evening with a come-from-behind victory in the 400 medley relay. Anchor swimmer Jack Conger caught California over the final 100 yards. The team’s time of 3 minutes, 01.23 seconds was the fastest ever, setting NCAA and U.S. Open records.

Texas will take a 171-119 lead over second-place Cal into Friday’s second day. The meet ends Saturday.

And the UT 200 free relay kicked things off in fast style with a victory to open the first of three nights of finals.

It was the first time since 1996 that the Longhorns have won the NCAA title in the 200 free relay. UT got a boost when North Carolina State was disqualified.

California was second. The relay victory gave the Longhorns an initial six-point advantage over the Golden Bears, the defending national champion and UT’s main rival.

In the 500 free, UT junior Sam Lewis placed seventh and freshman Jonathan Roberts was eighth. Smith became the sixth-fastest performer in the event and the first Longhorn to win the event.

Clark is the son of former Texas swimmers John and Tori (Trees) Smith. And now he's a national champ, UT's first in the 500. #ncaaswim

@TexasMSD he accomplished what none of us before him could, a lot of 2nd places but first CHAMPION in the 500! Awesome swim #HookEm

After the first two events, Texas owned an 83-58 advantage over Southern California.

Texas’ Will Licon was runnerup to Stanford’s David Nolan for the 200 individual medley title. Nolan set an American record; Licon notched the third-fastest time in history.

After the 200 IM, the meet’s third event, the Longhorns opened a 109-70 advantage over second-place California.

Cal was able to cut into UT’s lead after the 50 free because the Longhorns failed to qualify anyone in the event. Still, Texas was ahead 109-85. Florida was in third with 84 points.

Texas stretched its advantage over Cal to 46 points after diving, thanks to a sixth and ninth-place finish. The Golden Bears do not have a diver qualified for the meet. The Longhorns have three.

We’ll update you throughout the night of six finals, so keep it here.