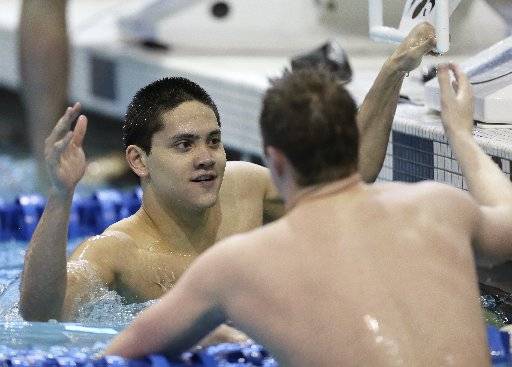 UPDATE: The Longhorns will take a huge, 124-point lead into Saturday’s final day of racing. It’s difficult to envision a scenario where Texas doesn’t win the program’s 11th national championship.

If UT does win, coach Eddie Reese will tie Ohio State’s Mike Peppe for the most team titles in NCAA men’s swimming history.

EARLIER: Texas, threatening to run away with the NCAA team title, swept the first four spots in the 100-yard butterfly Friday night. It’s the first time in meet history a school has swept one through four.

UT had a record six finalists in the event. They scored a record 92 points.

“Coming in, we knew we had phenomenal group of guys,” Schooling told ESPN. “Going one-through-four means so much to us. ”

Joseph Schooling is the 2nd fastest swimmer ever in the 100-yard butterfly, second only behind former Stanford swimmer Austin Staab.

Throughout the night, Texas continued to add to its lead over second-place Cal, the defending national champions.

Longhorn Clay Youngquist placed third in the 200 freestyle, giving Texas a 337-211 advantage over the Golden Bears.

Then Conger and Clark Smith finished seventh and ninth in the 100 backstroke, allowing the Longhorns a 362-249 cushion into the 3-meter diving event.

Will Chandler was fifth in the 3-meter springboard, giving the Longhorns a 377-249 margin over the Golden Bears.

Texas’ Will Licon pulled the upset in the 400 IM to kick off the individual events at the NCAA championships.

The Longhorns’ 200 medley relay opened the meet with a third-place finish.

It looks like Texas may run away with the NCAA meet. The Longhorns have opened a 223-185 point lead over defending national champion California.

Licon also became the first Longhorn in program history to win the 400 I.M. It had been the last event a UT swimmer had failed to win.

“Really. Had no idea. Wow. OK,” Licon told ESPN. “It’s more than an honor. I couldn’t do it without guys next to me … and my teammates supporting me. It’s all them.”

The next event is the 100 butterfly. Texas qualified an NCAA record six finalists.

“We were hoping to get six that would score,” said Texas coach Eddie Reese. “Do something like that is a real credit to the kids. … It’s always good to go fast now.”