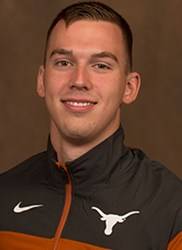 Sophomore Clark Smith won an NCAA championship in the 500-yard freestyle Thursday night. It was the first time a Longhorn swimmer had won the event in program history.

But for Smith’s family, it was a third title to celebrate.

Smith’s father is John Smith, who swam a leg of  UT’s national championship in the 400 medley relay in 1984.

For the youngest Smith, it is in the genes.