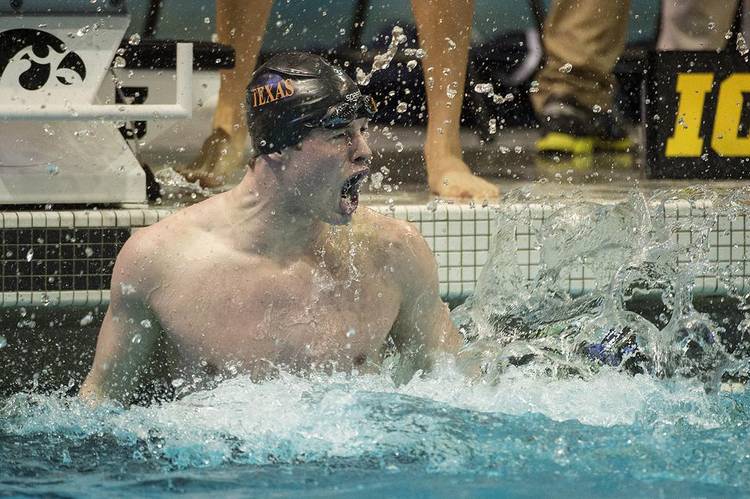 In NCAA swimming, the top eight performers make it to a final. Qualifying a pair of swimmers is a show of strength.

How about an NCAA-record six?

Six Texas swimmers earned a spot in tonight’s final for the 100-yard butterfly at the NCAA meet. The top four times were posted by Longhorns, led by freshman Joseph Schooling and sophomore Jack Conger.

UT knew it was strong in the butterfly. Three swimmers posted times in the 100-meter version of the race that ranked among the top 10 in the world last summer.

But this strong? It might’ve dashed a California comeback. The Golden Bears, the defending national champions, were shut out of the finals. Their best guy finished ninth.

If no one jumps early, Texas will earn a minimum of 81 points in this one event tonight. Coming in to tonight’s finals (the second of three final sessions), the Longhorns have a 171-119 lead over Cal.

From the web site swimswam.com:

“But after a solid 400 IM for Cal, Texas struck back with an absolutely devastating 100 fly. It’s hard to call anything a killing blow with nearly two full days of swimming left, but Texas put no less than 6 men into the A final, very possibly the nail in the coffin of any Cal comeback hopes.

For UT’s Clark Smith, NCAA titles are all in the swim family

Texas scores record 92 points in one event at NCAA swimming