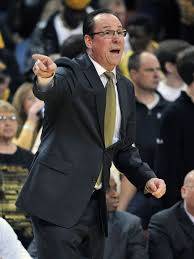 Wichita State's Gregg Marshall will be a leading candidate to replace Rick Barnes.

Staff writer Brian Davis’ seven potential candidates Texas may pursue to replace Rick Barnes, listed in order of probability that the Longhorns could get:

Pros: Jumped onto the national radar by leading VCU to the 2011 Final Four. VCU was ranked as high as 14th this season. Has made five straight NCAAs, which makes him the darling of the mid-majors coaching fraternity.

Cons: Despite those six straight 20-win seasons, VCU hasn’t won a regular-season conference title, either in the Colonial Athletic Association or the Atlantic-10. Some believe Smart doesn’t want a bigger platform. And his age may hurt him.

Could Texas get him? Definitely — if Smart wants to coach in a major conference.

Pros: Has had an unbelievable run at Wichita State, going undefeated during the 2013-14 regular season and winning eight regular-season and eight league tournament titles.

Cons: OK, that’s a great record. But It’s been all at Wichita State, a Missouri Valley Conference school. The Shockers have beaten a few Big East teams, but wins over Alabama don’t count for much.

Could Texas get him? Probably. Marshall has reportedly said he’d take the Texas job — if it’s offered.

Pros: Has turned a mediocre Virginia program into an ACC powerhouse. The 2013-14 team won the ACC and was a No. 1 seed in the NCAAs. This year’s was ranked No. 2 in the country.

Cons: Yes, his teams win, but Virginia’s a plodding snoozer. It averages 65.3 points per game, which ranks 224th in Division I. But its defense? No. 1. Still, Texas fans want to get excited about basketball again. How do you do that? By scoring points.

Could Texas get him? Hard to say. Why would Bennett leave when things are going so well?

Pros: Getting Miller would be a coup for Texas. The Wildcats have an excellent basketball history, and Miller has won at least 30 games in three of the last five years. Texas would become an automatic contender again.

Cons: Why would he leave Arizona? The Wildcats have a history and basketball aura that puts Texas to shame.

Could Texas get him? Doubtful. You don’t leave a basketball power like Arizona, which is already in a major conference, for a perceived step down to coach at a football school.

Pros: Miller has skins on the wall. A proven recruiter, he helped Arizona get to the Elite Eight in 2011. Then he took the Flyers there himself in 2014.

Cons: Miller would be a calculated risk, turning the keys over to a coach in his mid-30s. Archie Miller is Sean Miller’s brother, so the family bond could be a positive. Given that Texas AD Steve Patterson needs to energize the program to raise money for a new arena, is this a solid front man?

Could Texas get him? Can’t see why not. Miller did sign a contract extension this week at Dayton. Then again, it is Dayton. This is Texas.

Pros: Williams was a hot commodity when he was at Marquette, as his teams there routinely challenged for Big East titles, won 20 games and were a NCAA tournament fixture.

Cons: The bloom has come off the rose. Williams said it was a very tough decision to leave Marquette for Virginia Tech, and things haven’t gone so well. The Hokies went 11-22 this year.

Could Texas get him? Probably. But would Horns fans want him at this point?

Pros: Looking for an off-the-radar candidate? Jacobson’s the hot name right now, having guided Northern Iowa into the NCAAs with a 30-win season.

Cons: He’s hot right now, but what about previous years? Northern Iowa hadn’t been to the NCAAs since 2010. Texas likely can find lots of coaches with middling .650 winning percentages.

Could Texas get him? Sure. But Patterson will likely be aiming higher.