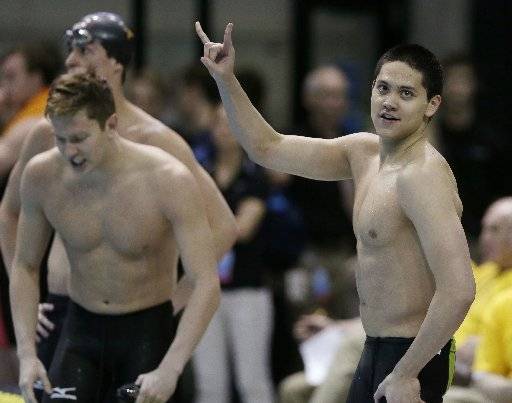 Texas qualified enough swimmers in today’s prelims at the NCAA championships to all but secure its 11th national team title tonight.

After two days of finals, Texas had amassed 399 points. California, the defending national champions, were 124 points back in second place.

If the Longhorns win, coach Eddie Reese will notch his 11th career title as well. That would tie him with Ohio State’s Mike Peppe as the all-time winningest men’s coaches in NCAA swim history.

Reese is the only swim coach in history to win national titles in four separate decades. Top assistant Kris Kubik has been with Reese for all the national championships.

Also, we’ll be keeping an eye on the point total. The Longhorns could crack the top five for most points ever at a NCAA meet.

A point projection has UT at 524, with a winning margin of 129. That total includes diving. If it holds, or increases, it would be among UT’s most lopsided wins.

UT’s Will Licon continued his amazing run through the NCAAs by qualifying first in the 200 breast stroke, holding off American record holder and defending NCAA champion Kevin Cordes of Arizona.

Licon’s time of 1:49.54 was the second fastest ever. Licon won the 400 individual medley Friday and was runnerup in the 200 I.M. Thursday.

Texas qualified 2-3-4 in the 200 butterfly. Jack Conger, the American record holder in the event, was second, followed by Joseph Schooling, who won the 100 fly, and Clark Smith, who won the 500 free. Michigan’s Dylan Bosch, the defending national champion, is the top seed. Cal qualified one finalist.

Plus, there will be three timed heats in the 1,650 free. Texas has two swimmers competing. Cal has none.

Texas scores record 92 points in one event at NCAA swimming