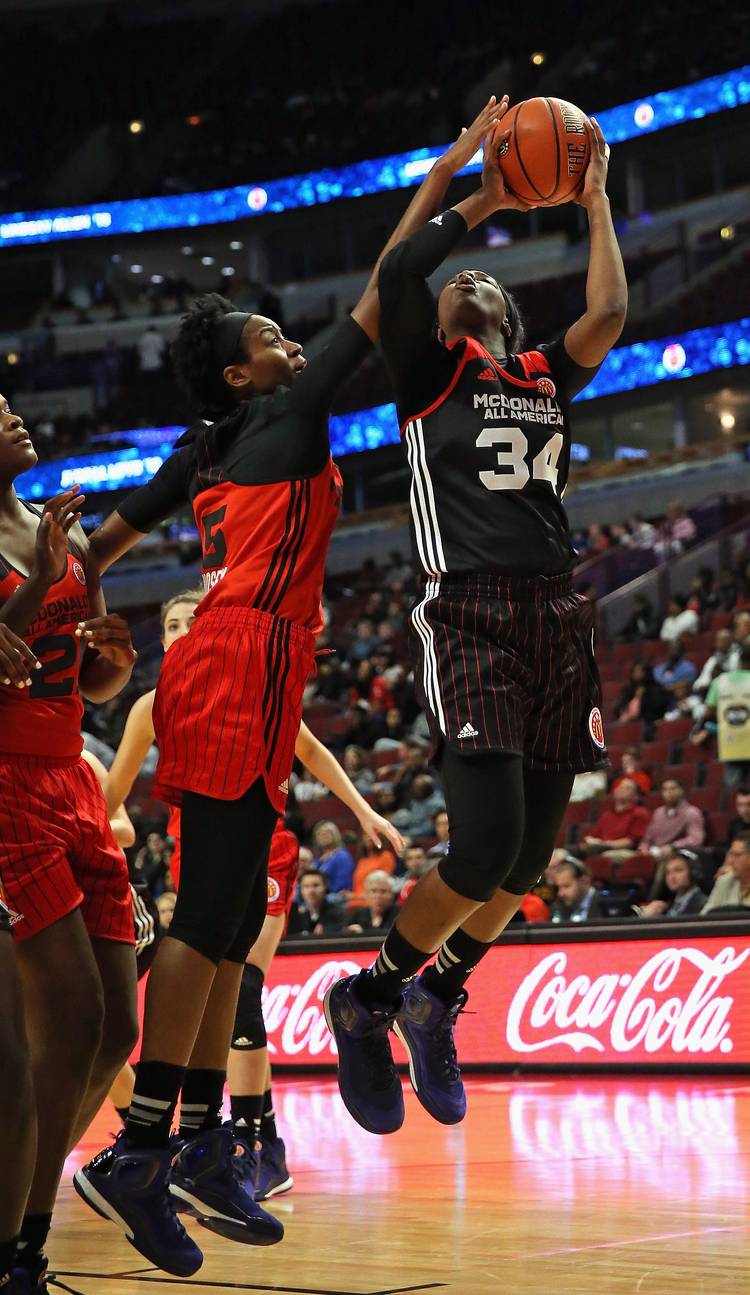 The University of Texas was represented by two incoming recruits at last week’s McDonald’s All American Game. Guard Lashann Higgs and wing Jordan Hosey, who both attend Texas high schools, suited up for the West team in a game that was played on April 1 at Chicago’s United Center.

A 5-9 guard from nearby Cedar Ridge, Higgs is rated by ESPN HoopGurlz as the Class of 2015’s sixth-best prospect. Higgs was profiled by the American-Statesman in last Wednesday’s newspaper.

The 6-1 Hosey attends Manvel High. Also a top-10 recruit on the ESPN HoopGurlz list, Hosey was this season’s District 22-6A MVP and she also scored 14 points in the 2014 Class 5A state championship game.

Hosey sat down with the American-Statesman at a media function in Chicago last week. During our interview, she discussed her future at Texas, winning a state title and her jersey number reminds her of foul trouble.

Austin American-Statesman: To you, what does it mean to be a McDonald’s All-American?

Jordan Hosey: It means a lot. You get to play with the best against the best. It’s an honor.

JH: It was more than I expected. I knew that we were going to come down here and get to practice and get new gear, all of that stuff. Just going to the Ronald McDonald House, that was an eye-opener. You see how blessed you are and how fortunate you are to get to play. Some of those kids don’t get to come out of their rooms, so it was just an honor and blessing.

AA-S: Why did you sign with the University of Texas?

JH: Of course, I get to play with Lashann. It’s far enough away from my family, but it’s not too far so my parents can get to me if they need to get to me. They can come to the games. The education is amazing with what I’m majoring in (Hosey is majoring in education and plans to be a Special Education teacher).

The players, the coaching staff are just awesome. Coach Ashton is just an amazing coach. I get to play with the girls that I play summer ball with. It’s just AAU all over again.

AA-S: You won a state title as a junior, and Manvel knocked off an undefeated Duncanville team in that 2014 Class 5A title game. What was that experience like?

JH: That was just shocking. You defeat a team that wins 105 straight games… If I would have just beat them in the regular season, I still would have been happy, but I beat them in a state championship game. That was amazing. I still claim that to this day.

AA-S: The Houston Chronicle has chronicled your battle with dyslexia. How have you been able to overcome that?

JH: There are a lot of people that once they find out they’re dyslexic, they just want to give up and push everything to the side. I worked hard in the classroom. It still gives me problems, it’s actually been giving me problems here learning the plays. It’s just great overcoming something like that, and especially playing basketball with it. It gets difficult, but I just work harder.

AA-S: How did you develop into that kind of player?

JH: Before I started working out with my trainer, I loved playing offense, I loved being on the post and making lay-ups. We just got beat up so much in the training, I was just like ‘OK, I kind of like beating up (on others).’

AA-S: What is one thing that you like most about the sport of basketball?

AA-S: What is your favorite non-basketball activity?

JH: I eat a lot of Wing Stop. My favorite meal my parents cook together is fried shrimp, fish and French fries.

AA-S: Do you have any hidden talents?

JH: I would say singing, but if somebody sees this article and they ask me, I don’t want to… Dancing, I can dance.

AA-S: They had a dance competition during the Powerade Jam Fest on Monday. Why didn’t you participate?

JH: I didn’t want to show my moves (on TV). I might be dancing back-up for Chris Brown one day.

JH: When I first started playing basketball, I was always in foul trouble. When I fouled out, it’d be five (fouls), and I was like, that’s so easy (to remember). Then, I was born in ‘95.

AA-S: What is your favorite basketball team?

AA-S: Who is your favorite player?

JH: It has to be Tina Thompson, because I train with her. She has taught me a lot. She helped my game a lot.

AA-S: What is your relationship like with Notre Dame freshman forward Brianna Turner, your former teammate at Manvel?

JH: She’s like my best friend, my little big sister. She has helped me a lot, just overcoming a lot with school and basketball. She’s just amazing.

AA-S: What did you think of Texas’ season?

JH: I think they did pretty good. With the two freshmen on the court – Ariel Atkins and Brooke McCarty – they did amazing to me. I can’t wait to get there next year and help them out. We’re going to go farther.