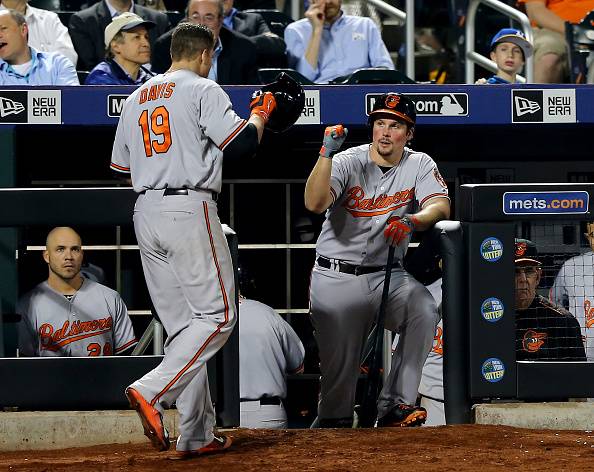 NEW YORK, NY - MAY 05: Travis Snider #23 of the Baltimore Orioles congratulates Chris Davis #19 after he hit a solo home run in the ninth inning against the New York Mets on May 5, 2015 at Citi Field in the Flushing neighborhood of the Queens borough of New York City. (Photo by Elsa/Getty Images)

Thousands gathered Friday to mourn Brian Moore, an officer with the New York Police Department, who was killed late last week in the line of duty earlier.

Moore was a huge fan of the Baltimore Orioles. His favorite player was Orioles star Chris Davis, who spent a semester on the Texas Longhorn baseball team and part of a season with the Round Rock Express.

Earlier this week, the Orioles took on the New York Mets. The Mets held a moment of silence in Moore’s memory. Moore had purchased tickets to watch the game.

In the ninth inning, Davis hit a home run.

“I said a little prayer before the game after finding everything out,” Davis told the Baltimore Sun. “It’s just kind of heavy on my heart. If I could do something to honor him, whether it was something to help us win or a bright spot, I’m glad God came through.”

The Orioles intend to present the Moore family a baseball autographed by Davis and a white jersey signed by the whole team.

QB Everett Golson transferring from Notre Dame … but to where?