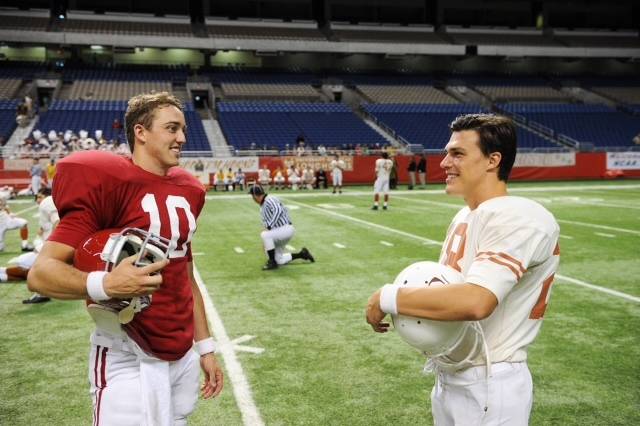 The feature-length movie “My All American” depicting former University of Texas football player Freddie Steinmark will be released on Oct. 9 according to a press release. The movie, based on Jim Dent’s book “Courage Beyond the Game; The Freddie Steinmark Story,” stars Finn Wittrock (“Unbroken,” “Noah”) as Steinmark and Aaron Eckhart (“The Dark Knight,” “Thank You For Smoking”) as legendary UT coach Darrell Royal. In June 2014, action scenes were shot in the Alamodome in San Antonio.

Former Texas quarterback Case McCoy and Texas wide receiver Jordan Shipley play roles in the feature. McCoy serves as Arkansas quarterback Bill Montgomery. Texas played Arkansas in a pivotal game during the 1969 season in what was billed as “The Game of the Century.” Shipley stars as wide receiver Cotton Speyer, a key wideout during that season for the Longhorns.

Steinmark, a safety for the team that season, never played a game after the win over Arkansas. The next week he was diagnosed with cancer and doctors amputated his leg. Steinmark died two years later.

“You feel like you have a responsibility to do it (the role of Steinmark) justice,” Wittrock, 29, told the Statesman in June 2014. “Because he’s such a beloved person, there’s a certain amount of pressure from this community. But more than pressure, it’s been a gift. It’s been an education.”

Ben Johnson and C.J Hinojosa say they will turn pro