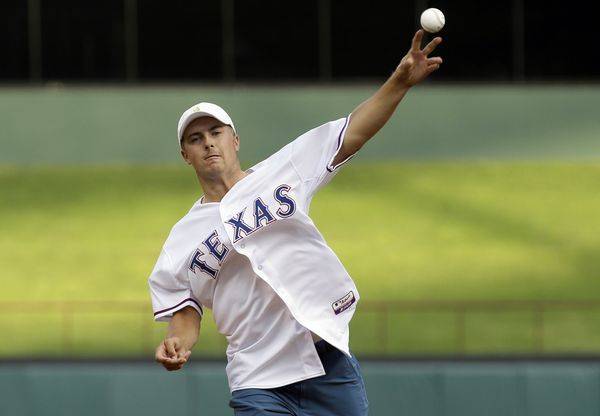 Current Miss Texas Shannon Sanderford thought it might be rap.

At Tuesday’s Rangers game in Arlington, both famous Texans threw out first pitches, and then Sanderford showed off her rhyming talent for the upcoming Miss America pageant.

Her last line: “Jordan Spieth, wanna call me for a date?”

You can watch the full rap below:

There are at least two things we think Sanderford overlooked here.

First, Spieth’s is a huge baseball fan and supporter of Texas teams so asking him out mid-Rangers game might not be the best idea.

Second, Spieth’s girlfriend was also at the game. The camera showed the couple together immediately after Miss Texas’ poetic proclamation.

Correction: A previous version of this post stated that Sanderford was part of the “Miss USA” contest rather than the “Miss America” franchise.

• Spieth, Johnson take their competition to the ballpark