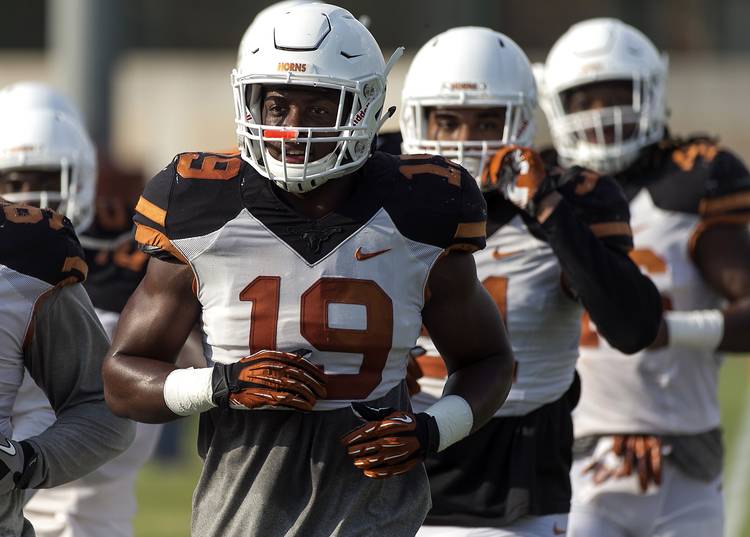 Texas #19, Peter Jinkens, linebacker, moves to the next drill with the linebacker corp during Longhorn practice held at the University of Texas' Frank Denius Field in Austin, Texas, on Tuesday, August 11, 2015. (RODOLFO GONZALEZ / AMERICAN-STATESMAN)

The Longhorns’ first game of the season kicks off Saturday night, and fans are getting fired up. The Texas Longhorns will be playing Notre Dame’s Fighting Irish.

Everyone from the University of Texas football equipment staff to Governor Greg Abbott to the satiricle Twitter voice of head football coach Charlie Strong’s signature mock turtleneck are showing the Longhorns some love and adding to the game day hype on social media.

It's gameday and the eyes of Texas are upon Notre Dame! #HookEm pic.twitter.com/Idzn1nwSas

Game Day Moves. This is how I will be entering all bars. Low-kicks are the new high-kicks. #texas #texasfight #longhorns #hookem #gameday #football

The prospect of a win tonight is so exciting that a few Longhorn fans are getting distracted it’s getting in the way of UT fans and their work.

What's a nice way to tell my boss that I'll be paying more attention to @Longhorn_FB than my customers? #Priorities #TexasFight

About to walk into work so won't be able to tweet or comment about my Horns but I'll get one last #HookEm in! #BeatND 🐂

And of course, no social media show of Texan pride would be complete without ragging on the opposition.

Not much to see inside Notre Dame Stadium. It's a minimalist approach. pic.twitter.com/8Da83qjrvI

If you’re a little rusty on your UT versus Notre Dame rival history, study up with our primer. For an in-depth look at what UT game day is like in South Bend, click here. And if you couldn’t make the trip out to see tonight’s game in person, take a second to answer our poll and let us know where the best place to watch UT football in Austin is.