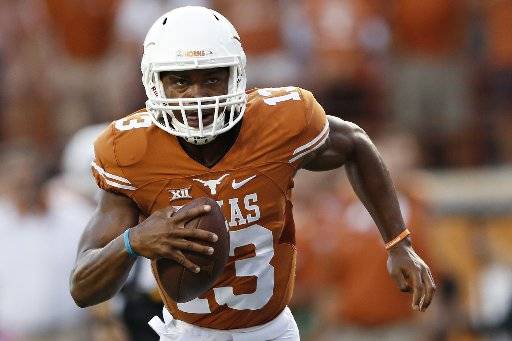 Three nuggets from the first half:

Heard is the best thing to happen to Texas since Colt left.
I can’t begin to tell you how bright the future looks with Jerrod Heard at QB. Cal isn’t a world-class defense but Heard is fast becoming one of the best young playmakers in college football. He completed 11 of 15 passes for 222 yards and an interception, plus he ran seven times for 42 yards and a touchdown.
Heard even drew a flag for crossing over the line of scrimmage and completing a threw. Even his penalties are exciting.
Not to belabor the point but I’m absolutely blown away that Shawn Watson played Tyrone Swoopes in front of this kid. Not a good look for him or his boss Charlie Strong.

Before this season, the biggest story surrounding Daje Johnson was his release of a CD that drew the ire of his coach. Now he’s starting to look like the playmaker Texas envisioned years ago.
He has three catches for 108 yards against a Cal defense that has no answer for his speed. The Bears have also made it a point to to not to kick off in his direction, preferring to kick to Johnathan Gray.
I would still love to see Jay Norvell hand the ball to Johnson a few times. He needs to get his hands on the ball.

Up and down defense
Call it bend and don’t break but the defense hung in there the first half against a quality college football offense and Jared Goff, who will go in the first round of next spring’s NFL draft.
Texas was gashed for runs of 49 and 37 yards by Cal running backs but Kevin Vaccaro prevented a touchdown by separating Khalfani Muhammad from the ball near the five-yard line then Shiro Davis and Tank Jackson collaborated on a sack-caused fumble-fumble recovery to set up Texas’ third TD of the half.
Cornerback John Bonney is getting torched. I expect Vance Bedford to give him some safety help over there.
All in all, it was an exciting half of college football. The Horns are in play to spring the upset but the Bears aren’t going away. Texas gets the ball to start the second half. This won’t be easy. Safety Jason Hall has a hurt shoulder and Dylan Haines is out after an ejection for spearing.