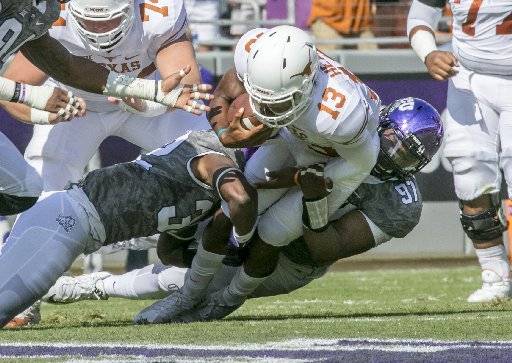 FORT WORTH — Where do I start? 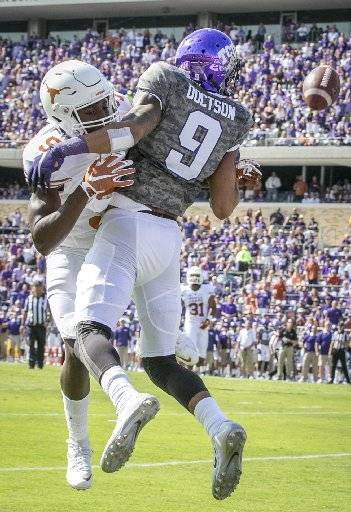 The Longhorns have put up their worst half of football since, well, since Notre Dame. The team hasn’t played with any fire and the word “unprepared” is probably trending on Twitter as we speak. No amount of excuses will make the embarrassing first two quarters go away.

NOTHING SPECIAL ABOUT THESE  SPECIAL TEAMS

Remember last week when Nick Rose made all two field goals of 40 plus? He missed his first two today, from 39 and 40 yards, respectively then Add to that, deep snapper Kyle Ashby sailed one over Michael Dickson’s head for a safety. Rose then sailed the free kick out of bounds.

Not to be outdone, Dickson launched a 22-yard punt out of bounds.

While Trevone Boykin has ripped up Texas for 246 yards and four touchdowns, Jerrod Heard hasn’t been horrible.  He hasn’t had a lot of time in the pocket against a decimated TCU defense that gave up 52 points to Texas Tech last week. The offensive line is overmatched just like all the other Texas units.

He got loose on a couple of scrambles in the second quarter but hasn’t been able to make anything happen in the passing game. It should be noted that he has been the victim of a couple of drops, not that it would matter in the long run.

This will be one long second and an even longer second half of the season. Texas is what its record suggests: a 1-3 team playing against the nation’s fourth-ranked team.

It’s a classic mismatch that’s about to get worse.