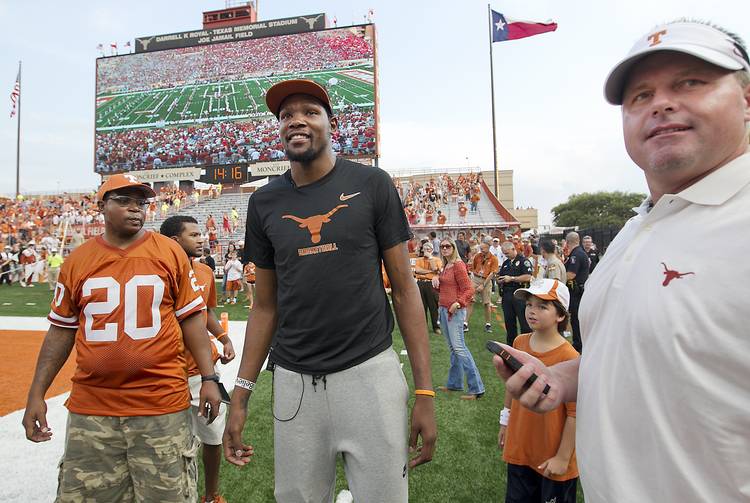 Former Texas Longhorn and current Oklahoma City Thunder player Kevin Durant was on hand for the ceremonial coin toss. He was mobbed by people trying to get a closeup look at the NBA All-Star. Also on hand was Roger Clemens, former Longhorn and Major League baseball player. Texas lost to Ole Miss 44-23 Saturday night September 14, 2013 at Darrell K. Royal Texas Memorial Stadium in Austin. The lopsided loss is the second in a row in the young season and brings much doubt in the success of the program under head coach Mack Brown, seen here after the game with a disappointed look as his team faltered in the second half. RALPH BARRERA / AMERICAN-STATESMAN

The UT System Board of Regents Friday finalized a 15-year, $250 million contract between UT-Austin and Nike.  The agreement with Nike is what is expected to be the richest shoe and apparel deal in college sports. The agreement was first reported by the Statesman earlier this month. The contract’s total value eclipses the University of Michigan’s 15-year deal with Nike this summer worth an estimated $169 million. At the time, it was widely hailed as the biggest deal in college sports.

Some of the details of the four-page document that was released at the Board of Regents meeting on Friday:

$22.5 million over the life of the contract for “financial support of UT Austin university initiatives (outside Intercollegiate Athletics) subject to UT Austin President’s approval.”

Creation of a line of apparel of “signature Kevin Durant-UT Austin line of performance products, apparel, and footwear for use by intercollegiate teams and for offering as NIKE and UT licensed retail product.’ The former Texas basketball star currently has his own line of basketball shoes through Nike.

To view entire Nike contract, click here or look in the viewer below

Longhorns bounce back against Texas Tech