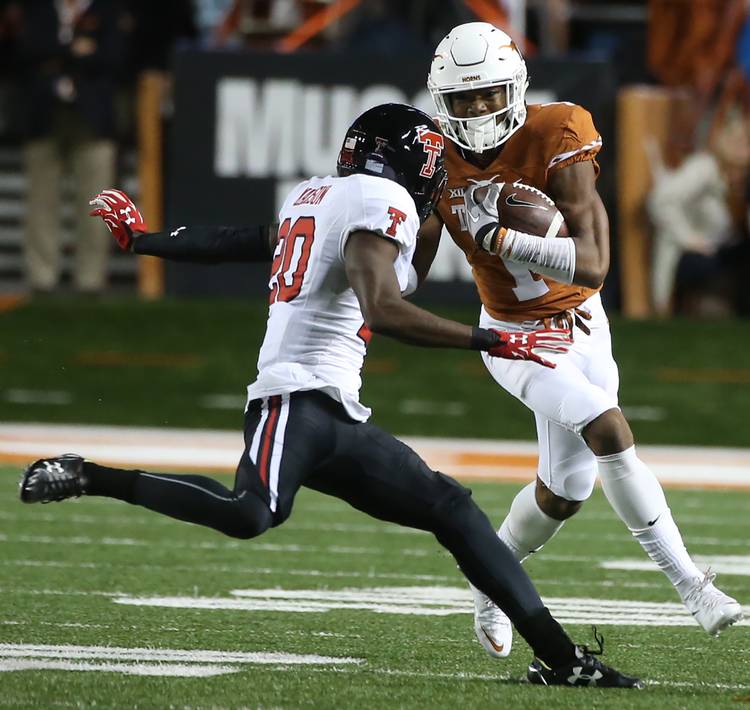 Texas's John Burt looks for yards against Tevin Madison of Texas Tech during the first half at Royal Memorial Stadium on Thursday, November 26, 2015. DEBORAH CANNON / AMERICAN-STATESMAN

Like big plays? And weird ones? The first half Thursday night between the Longhorns and Red Raiders were full of them.

Tech owned a 17-10 lead at halftime. All the points were scored in the second quarter.

The Tech pulled off a 65-yard deflection turned touchdown. It’ll go down in the stats as a Patrick Mahomes throw to Jakeem Grant. But Mahomes’ pass was a poor one. Longhorn freshman Holton Hill appeared to intercept the pass. But Tech receiver Devin Lauderdale hit Hill, knocking the ball into the air. Grant caught the carom and sprinted to the end zone.

Texas matched Tech’s big play with one of its own.

Freshman tailback Chris Warren pulled off a 91-yard touchdown run, UT’s second, 90-yard plus rush of the season. Warren may be the only tailback Texas has left. Kirk Johnson hurt his leg. D’Onta Foreman is not suited up for the game. Johnathan Gray (turf toe) is suited up, but hasn’t played.

Starting quarterback Jerrod Heard (head) is out for the rest of the game.

Longhorns in the NBA: Through Nov. 25