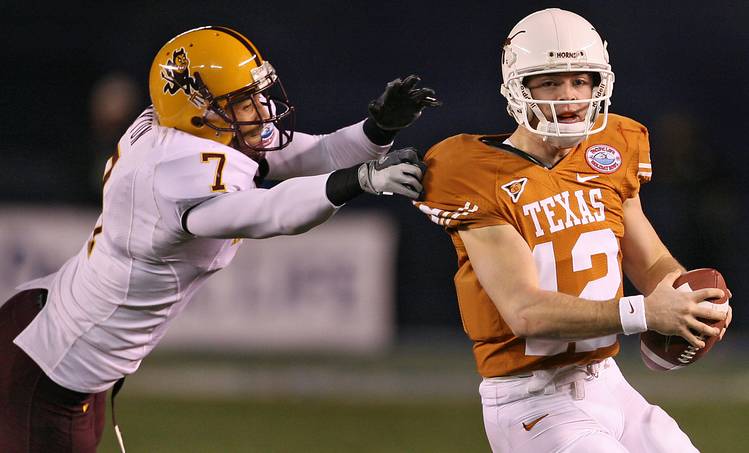 On Dec. 27, 2007, The Longhorns faced Arizona State in the Holiday Bowl. Led by sophomore quarterback Colt McCoy, the 17th-ranked Longhorns rolled into San Diego with a 9-3 record after finishing 5-3 in conference play. Arizona State showed up as the No. 11-rated team in the nation with a 10-2 record

The Horns offense in 2007 was paced by junior running back Jamal Charles’ 1,619 yards on the ground. His 18 touchdowns were also a squad high mark. McCoy threw for 3,303 yards and 22 touchdowns and Nate Jones paced the receiving corps with 70 catches for 795 yards.

In the Holiday Bowl, Texas raced to a 21-0 lead after one quarter on touchdowns by defensive tackle Derek Lokey, backup quarterback John Chiles and Charles. The Lokey catch for a score was a then-fastest score in the bowl’s history, only 81 seconds had ticked off the clock.

The Sun Devils closed the Texas lead to 11 in the fourth quarter, but the Longhorns overwhelmed Arizona State with 300 yards rushing as a team. Marcus Griffin’s two interceptions paced the Horns defense that caused five turnovers and sacked Sun Devil quarterback Rudy Carpenter four times. The Horns ended up scoring seven touchdowns on the night and won 52-34.

One touchdown was a fumble recovery from tight end Jermichael Finley in the end zone after McCoy had zig-zagged across the ASU secondary for 30 yards.

The game featured one of the oddest plays in Texas history. In the second quarter, Carpenter attempted a pass but threw the ball in an effort to avoid a sack by Texas linebacker Roddrick Muckelroy. The ball hit the ground and the officials initially ruled intentional grounding. The pass would later be ruled a backwards pass. The ball continued to roll toward the Texas sideline with players from both teams in pursuit.

Chris Jessee, a member of the Longhorns football operations staff and coach Mack Brown’s stepson, went onto the field and bent down as if to pick up the ball. The ball came close to Jessee’s hands, but it was not clear if he managed to touch it or if it bounced over his hands cleanly.

YOUR VOTE: Longhorns Story of the Year