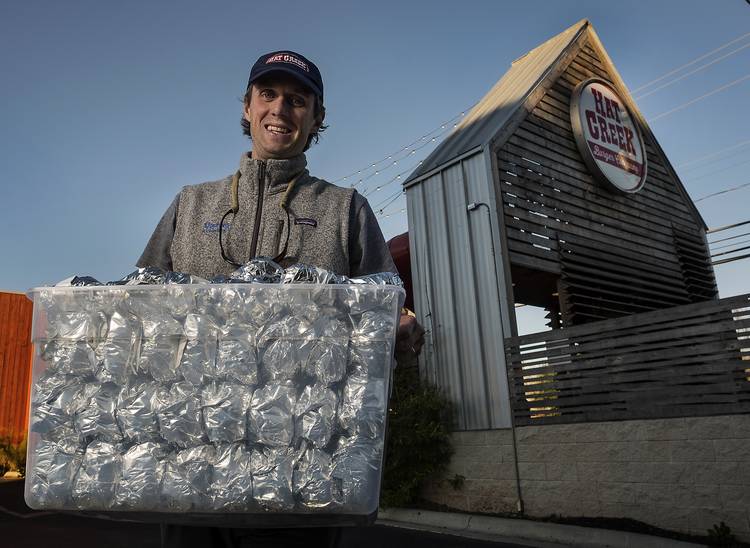 In 2008, former Texas basketball walk-on Drew Gressett founded Hat Creek Burger Co. in Austin after exploring real estate ventures in Dallas. What started out as just a food trailer, Hat Creek has spawned into four locations across the Austin area. A fifth restaurant will open in Lakeway this year.

Now Hat Creek makes the ‘100 most important burgers’ every day. One of Gressett’s location starts every morning assembling 100 hamburgers that are distributed to the homeless via Mobile Loaves and Fishes trucks.

From the Statesman’s feature on Monday:

“Every morning at Hat Creek Burger Co. on Burnet Road, teams of workers assemble 100 hamburgers — lettuce, tomato, onion, pickle, mustard — and pack them onto trucks that drive out to the hardest hit regions of homelessness and poverty in Austin.”

Gressett’s thoughts on why the company initiated the plan:

On how those burgers get distributed:

“His heart is so giant, and his will is so big that it inspires people around him,” Mobile Loaves & Fishes founder Alan Graham says of Gressett.

In the spring of 2009, the two sat outside the Hat Creek trailer and tossed around ideas about how the young company could give back to the community.

Gressett partnered with Graham and Austin Bible Ridge Church, and today 700 volunteers participate in the process of getting those 100 burgers from Hat Creek to the Mobile Loaves & Fishes trucks to the streets six days a week.

Gressett played in 16 games in four years at Texas and was honored with UT’s Jack Gray Award for character, citizenship and academic standing.

To read the entire feature about Hat Creek’s growth and other philanthropic endeavors Gressett has done with his company, click here.