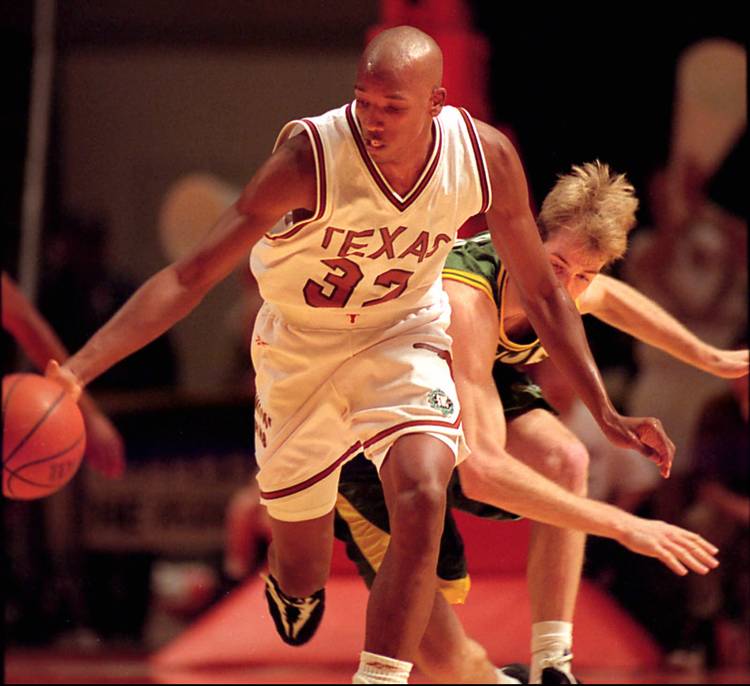 Reggie Freeman, manuevers past Baylor's #5, Doug Brandt, during the 1st half action at the Erwin Center. (Karen Warren/American-Statesman)

Twenty years ago this day, Texas shooting guard Reggie Freeman recorded the only triple-double in the school’s history, registering 22 points, 10 rebounds and 10 assists in the Longhorns’ 102-81 win over TCU in Fort Worth.

From the Statesman’s game report by Mark Rosner that day:

“Hill scored 20 of his 26 points in the first half Sunday and limited TCU guard Jeff Jacobs to three field goals as Texas blew out the Frogs 102-81 in front of 6,538 fans at Daniel-Meyer Coliseum.

Hill was one of five Longhorns who scored in double figures. Junior Reggie Freeman produced the school’s first triple-double — 22 points, 10 rebounds and 10 assists. Both Hill and Freeman played the entire 40-minute game.

The slender, 6-foot-1-inch Hill hit 10 of 14 shots, including four of six three-pointers. His performance came on the heels of 16- point outputs against Houston and Rice and a defensive effort that limited Rice’s Tommy McGhee to two-for-16 shooting.”

“I’ve wanted to get more aggressive and involved offensively, ” said Hill, who began the day with an 8.2 point average. “I need the help. We can’t always rely on Reggie. I’ve always been a confident shooter. I’m going to knock down open shots.”

“We totally took the crowd out of it, ” Texas Coach Tom Penders said. “At halftime I didn’t know what to say except `Let’s get out of here as fast as we can after the game.”’

Freeman finished the season as the team’s leading scorer with 22.4 points per game as the Longhorns finished with an 21-10 overall record, a 10-4 conference record (3rd place) and falling in the second round of the NCAA tournament.

In December 2015, center Cam Ridley almost matched Freeman’s feat, but came up one block shy, finishing with 19 points, 11 rebounds and a school-record nine blocked shots in a 67-55 victory over Applachian State.

Lyttle: What are the odds Texas hoops can win Big 12 title?