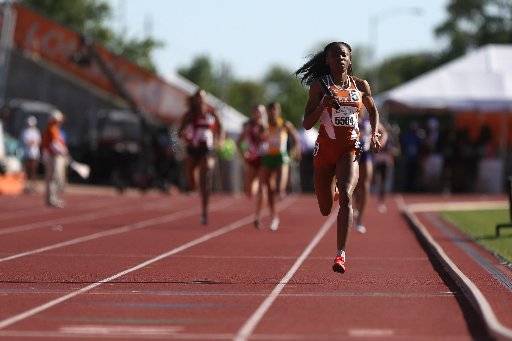 UT’s Courtney Okolo shattered her own collegiate record in the 400 meters on Saturday at the LSU Alumni Gold meet in Baton Rouge, La.

“I wanted to run that fast,” Okolo said. “We’ve been talking about it and training has been looking like I could run that fast so it was just about executing. I was relieved. I put a lot of pressure on myself to execute my race right.”

“You knew that she was capable of doing it, but until you see that time flash up you’re thinking, ‘Holy cow,’” Sategna said.

Teammate Morolake Akinosun also posted a top time in a collegiate event this season, winning the 100 meters with a wind-aided time of 10.97 seconds. She barley topped Oregon’s Hannah Cunliffe’s 10.98.

Texas freshman Asa Garica notched the second best mark in the triple jump this season with 43 foot-10.75 inches leap. She faulted on her first two attempts, then on her last try she posted the fifth best mark in program history.

The Texas men’s team were led by Byron Robinson, who ran the fastest time clocked this season in the 400 meters hurdles at 49.10 seconds.