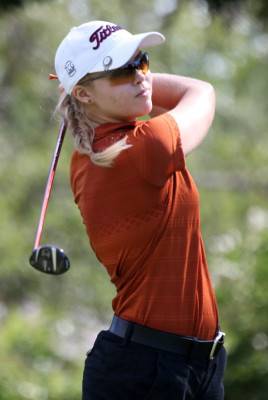 The Texas women’s golf team shot 3 over par in the second round of the Big 12 Championship on Saturday at Dominion Country Club in San Antonio and is five strokes off the lead in third place entering Sunday’s final round.

The Longhorns have four players in the top 20 and have made 29 birdies in two rounds, the second-highest total of the nine teams competing. Oklahoma State leads at 2 under par, and Iowa State is second at 2 over.

UT’s Sophia Schubert shot an even-par 72 and is tied for fourth at 2 under par, two strokes behind leader Sabina Pena of TCU. Pena carded a 67 Saturday and holds a one-stroke lead over Oklahoma State’s Kenzie Neisen and Iowa State’s Chayanit Wangmahaporn.

Schubert is tied with Cyclone Cajsa Persson in fourth place at 2 under par.

UT’s Natalie Karcher birdied three of her final four holes and finished with a 70. Karcher is in a three-way tie for ninth place at even par.