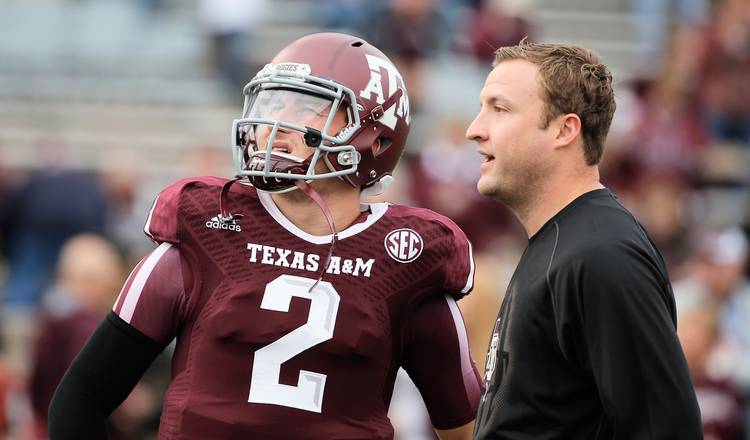 Johnny Manziel #2 of the Texas A&M Aggies chats with his quarterback coach Jake Spavital before the game against the Mississippi State Bulldogs at Kyle Field on November 9, 2013 in College Station, Texas. (Photo by Scott Halleran/Getty Images)

On Monday, the Statesman reported that a Texas recruiting writer filed a federal trademark claim on the #letsride hashtag in 2015 and has started selling T-shirts with the slogan Texas head coach Charlie Strong has been using on social media since 2014.

Yesterday a former assistant coach explained how the idea of using the catchphrase on social media came to be, implying that Charlie Strong may have a claim on that trademark. Even Texas athletics director Mike Perrin chimed in.

“When we become aware of trademark, branding, endorsement or similar matters, we go through a process,” Perrin said. “We gather information and background to determine what action is appropriate on our part. Sometime we continue to monitor the matter to see where it goes — sometime we take no action. What path we choose is based on the circumstances we see.”

But, since our original story published on Monday, some zealous Texas A&M fans have pointed out on social media that one former Aggie assistant coach has been using the hashtag since 2013.

It seems that former Aggie offensive coordinator Jake Spavital first used the phrase with this tweet:

Spavital was fired by A&M head coach Kevin Sumlin after the 2015 season and now has that same title at California. He hasn’t tweeted since he accepted that job, but his last tweet as an Aggie was this:

Was Strong a copycat or were the folks who hatched the idea of him using it on Twitter unaware of the usage in Aggieland? Who knows, but Strong only follows 188 handles on Twitter and those people are a mix of recruits, Texas coaches and Kevin Durant. No A&M coaches.

Perhaps the ownership of #letsride will never be settled.

RELATED COVERAGE: #Letsdecide: Should Charlie Strong have the rights to his own catchphrase?

Bohls: Just how much support does Charlie Strong have from the UT administration?