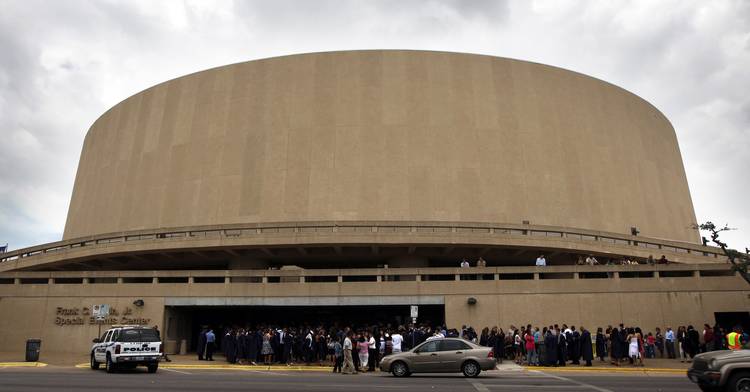 The Erwin Center is home to the UT men’s and women’s basketball teams but also features graduations, concerts and other events. (Ricardo B. Brazziell/American-Statesman)

On Thursday, officials from the Texas athletics office unveiled details of the preferred location of the new basketball arena.

The detailed athletics master plan, posted by The Alcalde online shows that the location would be the surface parking lot immediately south of the Mike A. Myers Stadium and Soccer Field. Details confirm the Statesman’s Feb. 2015 report the the site was “generating the most interest internally.”

It’s conceivable the Longhorns will play in the Erwin Center for several more years. But the school will eventually need a new basketball arena, as the Erwin Center will need to be razed — possibly as early as 2019 — to make room for Dell Medical School expansion.

Athletics director Mike Perrin told The Alcalde that a replacement for the center than was opened in 1977 would be needed in eight to 10 years.

The master plan also allows for the possiblity that the arena could be be built off campus and proposes an outdoors swimming and diving complex and making the indoor football practice facility permanent, removing the “bubble.”

Mike Perrin talked to the Texas Exes about the master plan:

Details of the plan can be found here:

Could Mack Brown be the next Baylor coach?